Over the few months rotations between sectors, small to large caps and tech to cyclical, has been more pronounced than over of past few years. This affects investing advice as we try and adjust to these dramatic shifts.

The first big separation in correlation came last November after the election when small cap Russell 2000 (IWM) (black line) rallied hard.  And then after some reversion again saw IWM catch back up to the might mega-cap tech as represented by the QQQ (red line). 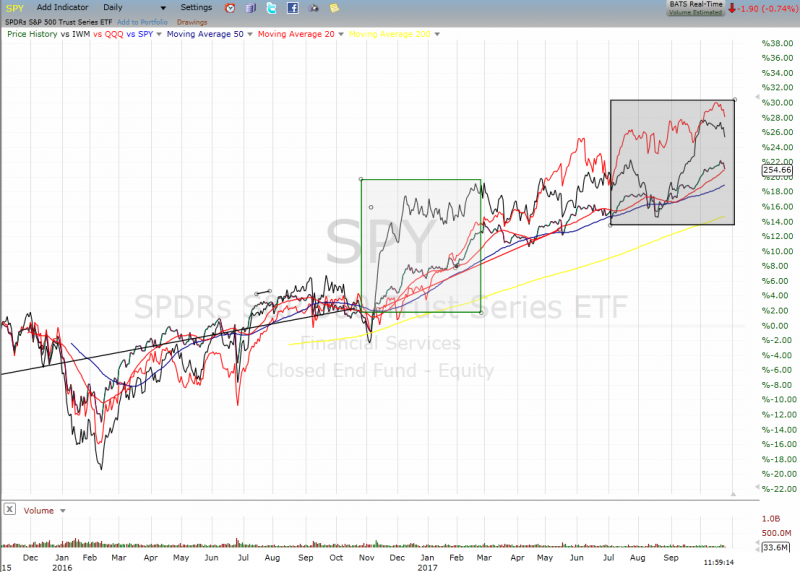 There has been plenty of people willing to opine on what this decrease in correlation, or the fancier term dispersion, might mean, and what investing advice makes sense in light of the changes.

To my mind, the recent action is healthy rotation, and the recent underperformance of the Nasdaq has actually been a blessing.

The FAAMG gang, as Facebook (FB), Apple (AAPL), Amazon (AMZN), Microsoft (MSFT) Alphabet (GOOGL) have come to be known accounted for a disproportionate percentage of gains from late 2015 to early 2017.

Even though they and QQQ remain near an all time high their price action has become somewhat sluggish of late.

Heck, owning Caterpillar (CAT) or 3M (MMM) has been the high alpha play as both exploded higher following their earnings reports this week.

Well, come tomorrow FA#&G! .. or whatever its acronym, gets a chance to grab the mantle back.

That’s because AMZN, MSFT, GOOG and INTC are set to report after Thursday’s the close.

These four mega-cap tech giants represent a whopping 27% of the weighting in the Nasdaq 100 Composite.  Throw in Gilead (GILD) and Thursday’s earnings reports are a full 30% of the Nasdaq! 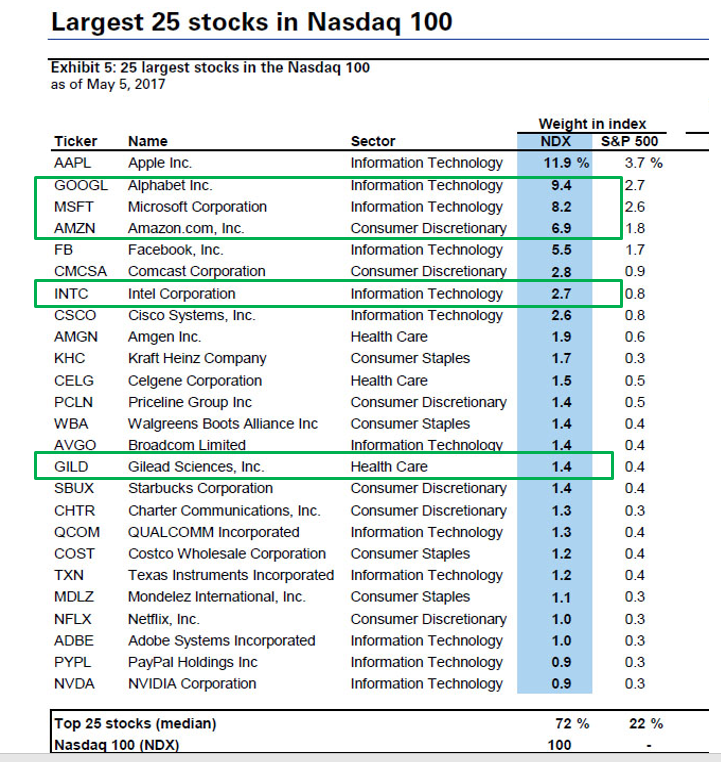 Play the Day of Reckoning

Depending on how the numbers come out this could be a make or break for Nasdaq QQQQ.

And when they do these stock will head back to new highs and use their 27% weight to take the QQQs with them.

I don’t want to buy in the specific names given the premiums are pumped up; they each carry an implied volatility ranging from 45%-85%  ahead of their earnings reports

But the broader index QQQ ETF has an implied volatility of just 15% which makes those calls relatively cheap.

If those big cap stocks deliver good earnings tomorrow I expect the Nasdaq QQQ to rally hard into next week. And my calls to ride those coattails and deliver a nice profit.

Related: This is Why You Shouldn’t Overrely on Calendar Spreads