Long-term growth is built on expansion opportunities, which is something that Shopify Inc.(NYSE:SHOP), A.O. Smith Corporation (NYSE:AOS), and Square Inc. (NYSE:SQ) all have. Shopify and Square are helping businesses make shopping — online and off — easier for their customers, and continuing to expand into vibrant markets. Water-heater maker A.O. Smith is a bit more mundane, but take a cold shower and you’ll see why emerging markets are keen to buy its products — which is the big opportunity ahead for the company. With that as a teaser, here’s a little more about each of these high-growth stocks.

You haven’t missed the boat on Shopify

Brian Stoffel (Shopify Inc.): I’m not going to give you a tough time if you think you’ve missed the boat on Shopify, a company that lets just about anyone start a business with an e-commerce presence. The stock has, after all, returned 750% over the past three years. But as with all of the greatest stocks in a generation, I think there’s still much more room to grow.

Shopify’s mission is to make commerce better for everyone. It does that in two ways: by offering a software-as-a-service (SaaS) platform to manage an online store — starting at as little as $9 per month — and by offering merchant tools like payment systems and shipping solutions. The first is a high-margin, recurring-revenue stream, but it takes a lot of money to develop and sell. The second is a low-margin growth initiative where Shopify succeeds only if its merchants do. But it costs very little to develop.

Growth from both revenue streams have been beyond successful. But what really has me excited is this: Shopify has pulled in over 840,000 merchants to its platform. That number stood at 500,000 just two years ago. Most of these ventures will fail — and that’s OK. Shopify makes the bulk of its subscription revenue from huge Shopify Plus merchants. Those same merchants are the big drivers of payment and shipping revenue, as well.

There’s no way Shopify can know beforehand which companies will fail and which will succeed. By casting such a wide net, it is catching an inordinate amount of big-time winners in the e-commerce world. With more and more global businesses moving online — and with Shopify readily becoming the de facto choice for such businesses — I think the stock can still soar from today’s prices.

First, the majority of the sales weakness is related to a decelerating Chinese economy. Sales in China are projected to decline as much as 10% in 2019, which will offset continued moderate growth in A.O. Smith’s developed markets. But that ignores the bigger picture, which is the desire for hot water in countries moving up the socioeconomic scale. China may be a weak spot today, but A.O. Smith’s products, which also include water and air purifiers, aren’t going to fall out of style. When Chinese growth picks up, the country will again be a bright spot. Economic swings are unfortunate, but they aren’t unusual.

Second… India. Although India is a tiny business compared with China today, A.O. Smith believes it is a huge long-term opportunity. To put a number on that, the company’s addressable market is projected to roughly triple between 2020 and 2030. Sales in China grew at a compound annual rate of more than 20% over the past decade, and if A.O. Smith can come close to that figure in India, it will be a huge benefit to its top and bottom lines. 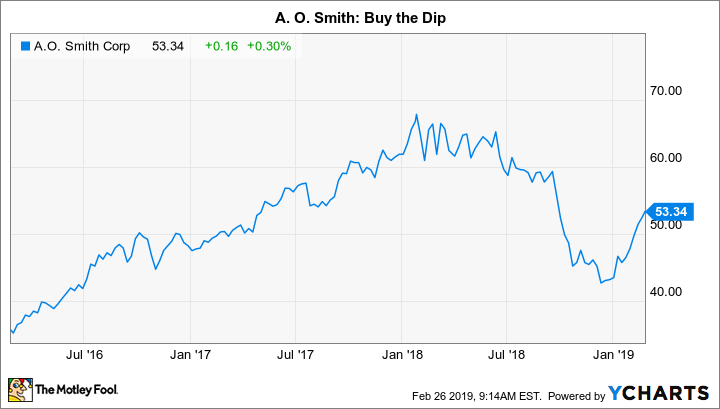 Although the stock has jumped notably so far in 2019, it’s still off some 20% from its early 2018 highs. In other words, investors can still take advantage of price weakness driven by concerns about China and buy into the long-term growth still to come from economic development in Asia.

Paying up for a stock that should pay off

Keith Speights (Square Inc.): I’ll be the first to admit that Square looks really pricey. After all, the payment platform operator’s shares trade at a whopping 110 times expected earnings. But I think paying up now for this high-growth stock should pay off over the long run.

The U.S. small-to-medium-size business payments market by itself presents a $26 billion opportunity. Square made a total of around $3 billion over the last 12 months. It has a lot of room to grow by just focusing on its sweet spot: the small and midsize customers that usually love its products and services.

But Square isn’t just focused on the payments market for these businesses. The company also offers e-commerce and other software solutions plus small-business loans to U.S. customers. These combined represent another $33 billion annual opportunity.

Square has also rolled out new products and services. Its Cash App competes head-to-head against Venmo and even beat PayPal‘s popular peer-to-peer payments app in cumulative downloads last year. The company’s newest product, the Square Card, a free business debit card for Square merchants, looks like a winner. This card enables it to collect interchange fees, plus serves as a great attraction for more businesses to use its other services.

On top of all of this, the global opportunity for Square is at least five times bigger than the U.S. market. The company will definitely have to execute well to continue to generate strong growth, but my take is that Square is up to the challenge.