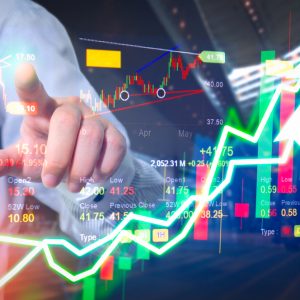 There are a few companies out there which tend to be battlegrounds for investors.  These are the stocks where there are often loud contingents of both bulls and bears.  The arguments can be very passionate on both sides. The investments in these companies can also be substantial (also from both sides).

Probably the best example of a battleground stock is Tesla (TSLA).  The volatility in the share price tells you how often bulls and bear will fight it on in that name.  A new entrant to the battleground arena will likely be Lyft (LYFT), which already seems to be divisive to investors.

But the one that I’m going to focus on today is Twitter (TWTR).  While no longer as volatile a stock as something like TSLA, the microblogging site has been a hot button topic among investors basically since its IPO.  TWTR is one of those stocks that has an ultra-popular product, but not necessarily the easiest path towards monetizing its popularity.

Personally speaking, I don’t think there’s any question that Twitter is a valuable resource.  I use it constantly for real-time news on the markets and also to follow my favorite sports teams.  In general, the platform doesn’t seem to have any issues attracting users.

On the other hand, keeping users coming back to the site on a regular basis has been challenging for management.  Getting advertising to pay off has also been something of a challenge. And, the company is regularly being criticized for its policies on removing/banning accounts.

Due to the often-perplexing nature of TWTR’s business model, earnings reports tend to take on quite a bit of importance each quarter.  And, this last quarter was no exception.

For the first quarter of 2019, TWTR strongly beat expectations for revenue and user growth.  The result was the stock price spiking over 15% on the day of the announcement. Clearly, the bulls won out – and for good reason.  The report was about as positive as could reasonably be expected. It appears the improvements made to the platform in recent months have done a decent job of attracting both users and ad dollars.

So, it was no surprise to see a significant amount of bullish options activity on TWTR the day of earnings.  In fact, of the roughly $28 million spent on options contracts on earnings day, 84% of it was considered bullish.

Looking at the tape, there was plenty of straight call buying going on, from options expiring at the end of the week all the way out to January of next year.  It even looks like someone purchased a 65-70 call spread in January (buying the 65 calls, selling the 70 calls) with the stock just below $40. That’s clearly a very bullish trade given how far away it is from the current price. 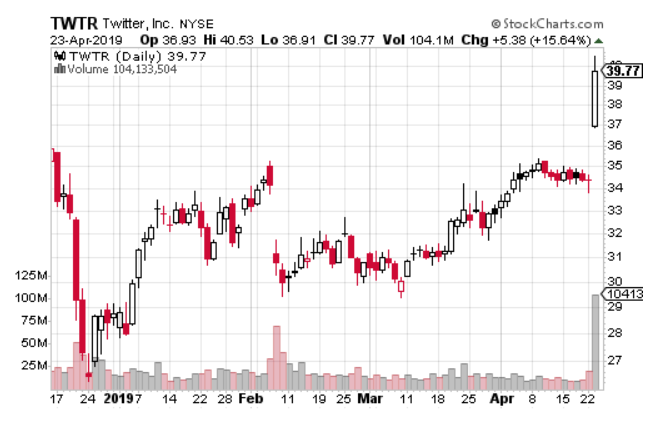 What if you’re also bullish on TWTR but don’t want to buy a far out January call spread? Are there better alternatives?

I still like the idea of using a call spread, but I’d go closer to the stock price ($40) and use a closer expiration so you don’t have to pay up for the premium.  For instance, the June 42-46 call spread (buying June 42 calls, selling the 46 calls) only costs about $0.75.

Read this if you’ve ever lost money trading options

Does everything seem to go wrong right after you place an options trade?

You watch the stock and everything is going right.

Then you open the trade… and within an hour, you’ve lost money.

It’s not your fault. You just simply weren’t given the “behind the scenes” knowledge every options professional knows.

The road to success for your first big, triple-digit options win is simple.

Have a checklist for every trade so you don’t repeat rookie mistakes.

For the first time ever, after 20 years, I’m releasing my own personal options trading checklist for no charge.

Click here to get the checklist and stop losing money right now.

I’m only sharing it for a limited time, so claim your copy immediately even if you’re not trading right now: CLICK HERE.