The past week has seen unprecedented swings in stock prices.  But, as we enter day 7 of the Covid virus freak out the “SPDR 500 (SPY – Get Rating)” is starting to find a range within the $300- to $310 area. I expect more consolidation within this area as both humans and computers use these levels to both “buy the dip” and ‘sell the rips” in what is known as traders fade.

Or, in the options world is called gamma scalping. What am I talking about? Back in my days as a market maker on the floor of the “Chicago Board of Options Exchange (CBOE)” the third Friday of the month was known as ‘gamma day’.

That was prior to 2005 when weekly options were introduced—to show my age I was on the CBOE from 1991-2002—and ever since ‘gamma day’ has been a weekly occurrence.

Actually, with some Index and ETFs like SPY having expiration three times a week (Monday, Wednesday Friday) Gamma scalping has become a full-time feature of the trading landscape and as this article from the Wall Street Journal it may be warping price and volatility levels.

The nut of the piece is “There’s a powerful force at work in market that helps explain why stocks seem to do nothing for long periods and then suddenly lurch into activity. Market players have noticed this force—known by some as a “gamma trap”

Before getting to implications let’s drill down into the definition and mechanics of what an options Gamma is:

Gamma is a second derivative and measures how much your delta will change per unit change in price.   It means that as prices rise your delta increases.  Or more pertinently as prices decline your delta turns more negative, meaning you get longer as prices go up, and shorter as prices decline.  Sometimes people confuse gamma with vega which is a measure of volatility. They sometimes act in concert but are not related.  Kind of like country and western.  I have no idea what that means but you get the gist.

As the time approaches expiration, the gamma level of an option increases. Like time premium levels, gamma also falls under the normal distribution curve with the at-the-money (ATM) options having the highest levels of gamma. This is why most people who gamma scalp elects to do so by using the ATM options to buy (or sell if reverse gamma scalping) straddles and strangles.

Here is a graph of the gamma curve: 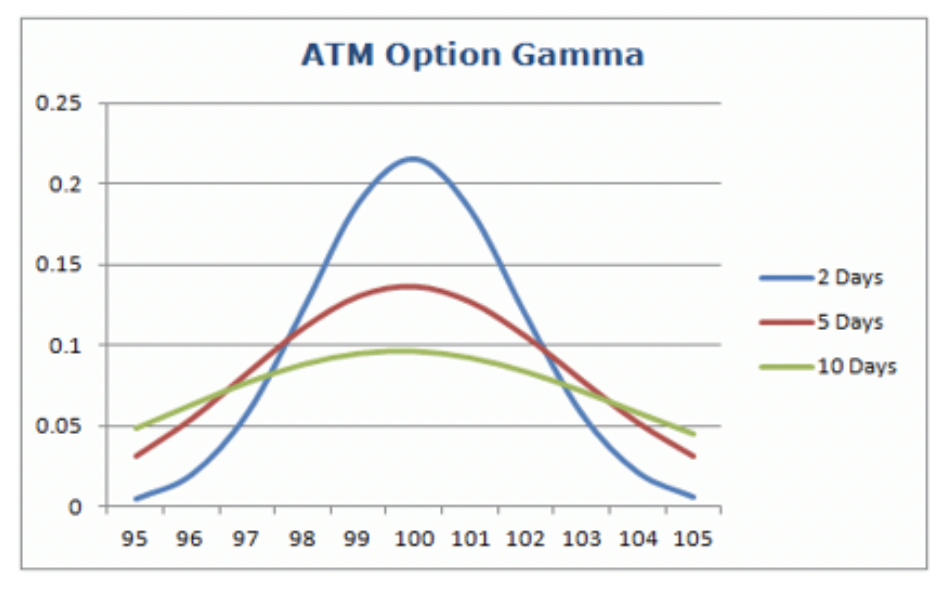 Gamma scalping is the process of adjusting the deltas of a long option premium and long gamma portfolio of options in an attempt to scalp enough money to offset the time decay of the position.

In practice, it least my day, it simply meant buying both a put and call (usually ATM) on the day of expiration and the buying or selling shares as the underlying price rose or fell, to pick up incremental or ‘scalp small profits’ while maintaining a delta neutral position.

This had the tendency to dampen volatility because as prices rose market makers would sell stock or if buy stock as prices fell.  This often led to the phenomenon known as pinning the strike price at expiration.

Since the advent of weekly options, you can see how their popularity has grown especially over the past few years in which their volume surpassed the ‘regular monthly’ contract. 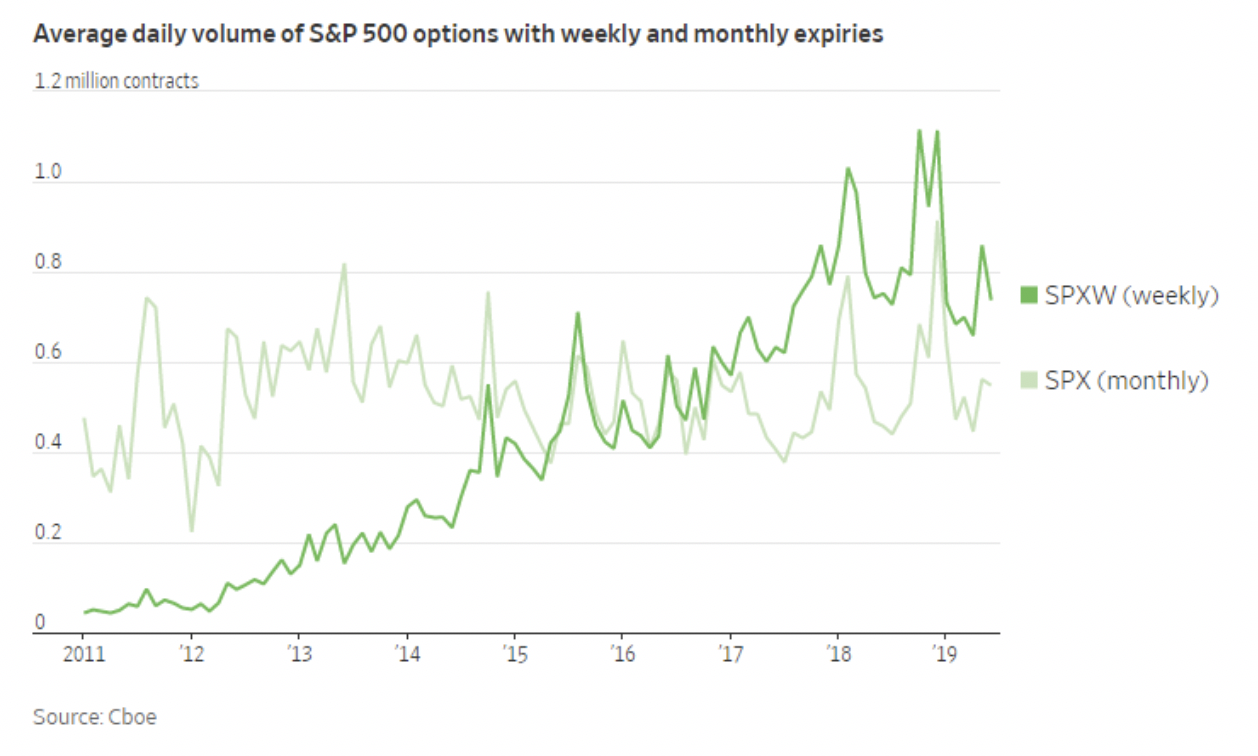 The Journal article is making the case that big investors such as institutions and hedge funds have actually been engaged in “negative gamma” which would entail selling both puts and calls to collect the premium.

If you are short gamma (net short options and hence volatility) one usually has to take a defensive stance one large moves occur trades which put them at high risk of compounding losses and setting off a self-fulling bout of ever-increasing volatility.

Meaning, as prices rise one is forced to… Continue reading at StockNews.com