Home / Featured / Are We Really Still in a Bear Market Despite the Bounce? 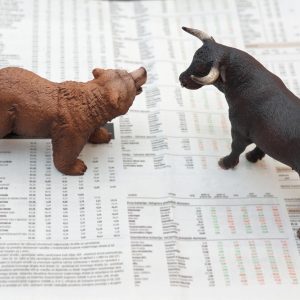 Last week, stocks posted their best week in 46 years and assuming Friday’s rally holds are on pace to gain over 15% for the two-week spa, this would leave the “SPDR Trust (SPY)” a full 25% off the March low and just 16% below the all-time low.

Technically, this might move the market out of the 20% decline that defines a bear market. But can one really say that a recession was both priced in and then recovered from, in less than a two-month span?

First, many will point to the various ways a ‘bear’ market and its cessation can be defined. I’m of the camp that a new bull market doesn’t begin until a new high is made to begin a fresh starting point for measuring the size and duration of a bull phase. But, some of this “bull” or “bear” is just semantics and I think we should all agree the basic long term uptrend has been broken and despite the recent big bounce both the 100 and 200-day moving averages are still bending downward.

Many people are looking to the options market, which is essentially predicated on the probabilities of what the future may hold, for clues as to whether we are truly out of the bear phase. For the big picture view of what options volatility is saying, we can turn to the CBOE Volatility Index (VIX) which measures the implied volatility of the S&P 500 and by default the SPY.

The higher implied volatility or VIX is the wider range of price movement the market is bracing for.  Or put another way, the greater the uncertainty. And given that we know the market hates uncertainty, it’s understandable how the VIX became known as the ‘fear gauge’ and is associated with falling or bear markets.

While the VIX has declined by half from the peak of 85 it hit in late March, the current… Continue reading at StockNews.com