PEPE is a safer and more reliable positioning path in anticipation of the increase in implied volatility that precedes earnings.  The respective strategy actually avoids the actual event altogether.  Just as PEPC’s predictable, so is the premium pump-up leading into the event, only it’s more subtle — occurring incrementally over many days.

The strategy I use for taking advantage of rising implied volatility, leading into earnings season, is a combination of buying and selling both put and call spreads with different expiration dates. Essentially, it can be considered a double calendar spread strangle where you sell options that expire prior to the earnings report while simultaneously purchasing ones that expire after the event.

Like any calendar spread, it will benefit from the accelerated decay of the nearer-dated options sold short. But, this has an added tailwind due to the upcoming earnings release.  The options will see their implied volatility rise, causing the value of the spread to increase. To keep the position delta neutral, both put and call calendars should be established. These positions must be established in advance and closed before the actual earnings.

As you can see from the below order, one would collect a premium in the ballpark of $9 from the puts and calls sold, while paying roughly $32 for the purchase of the same strikes with the later expiration date — a total net debit of around $23.

[EXCLUSIVE Sale] Access the One-Month $19 Trial SALE Our Market Experts Are Raving About —the Options360 Service! 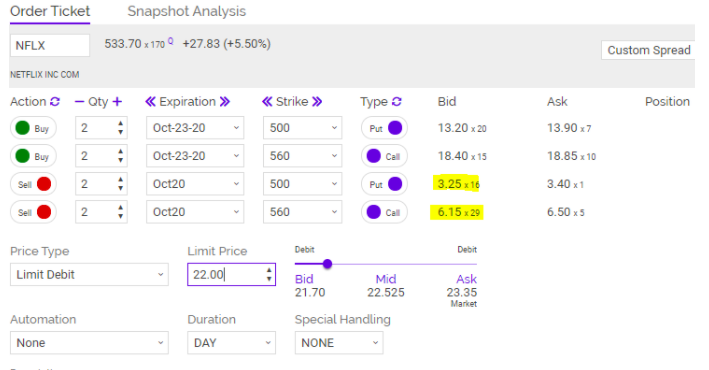 The expectation is that shares will remain within the $500 to $560 range through next week prior to the earnings report, resulting in the Oct. 16 options sold expiring worthless. Meanwhile, the Oct. 23 options you own would retain their value as premiums will remain pumped ahead of the earnings report. In other words, you collect $9, or an estimated return of 40% on the initial $23 cost.  An important point is to close the position prior to the earnings report to avoid the premium crush and event risk. The profits might not be as dramatic as catching a huge post-earnings move, but they can be substantial.  More importantly, they can be consistent and have a high probability of success.

[Last Chance] Take Advantage of this Exclusive $19 Trial Offer to the Options360 Service!