Home / Featured / Full Message / How & When to Make Adjustments

There are two types of trade adjustments, the fun and enjoyable type where you’re locking in gains, and the less enjoyable one where the actions are defensive and meant to minimize risk or potential loss. Today, I’ll address the latter as prompted by an email query regarding Zillow (Z) from an Option360 Service member that I received on Friday.  On Wednesday, I’ll drill down into how we’re managing our PayPal (PYPL) position that I revealed last Friday, which is on track for a nice profit.

[EARLY Bird Sale] Access Your Special One-Time Offer to the Service Our Market Experts Are Raving About —The Options360!

“Steve, I have a general question that applies to our typical diagonal spread, such as the current positions in Z. As the stock position moves lower, when or what would make sense to roll the short call to lower than the BTO call and convert to a bear call construct?”

This is a great question that addresses how, why, or when I would defend a losing position.  Here’s part of my answer:

“For me, the two main variables are:

One of the great aspects of diagonals is that you typically start with a reasonable amount of time  (5-10 weeks) and come with the built-in idea that you’ll be committed to adjusting/rolling.  If there’s still decent time or it’s early in the position’s lifecycle and the violation is not severe ( maybe still holding various support or trend lines), I might take an aggressive roll down. But, I’m fairly reluctant to turn a bull position into a bear.  If the only premium I can get is selling a strike underneath, it means I was pretty damn wrong.

“At that point, I’d close if any premium was left in long. Or, I’d outright change my mind and establish a new (different bearish position).   What I don’t like doing is thinking I’m still bullish, but having a bearish position even if just for a little while.”

Zillow presents a tough call.   I initiated with a short time frame as earnings are 11/06 and my intention was not to hold through.  Now, we don’t have much time left and the long (11/06) 102 is both approaching expiration and dropping further out-of-the-money. But, the basic longer-term chart/technical bull picture looks intact, and fundamentals are still strong.  The  $93-$94 level is horizontal support, trendline, and 50 dma.  Maybe this will be a rare case I extend out in time.

[Halloween OFFER] Capitalize on Our Special $19 Offer to The Options360 Service! 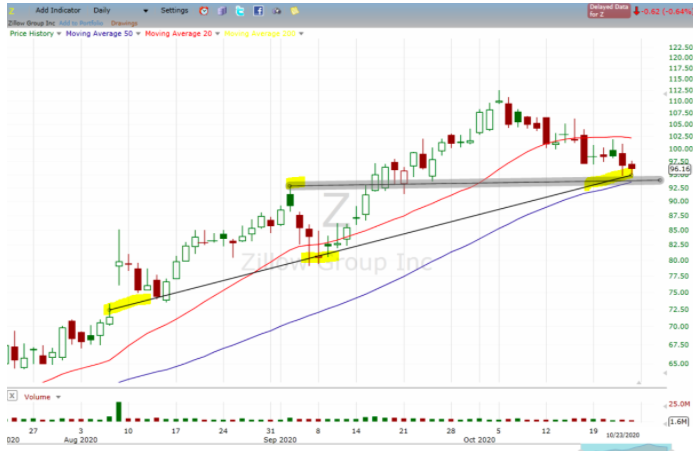 Thus far in Z, I’ve taken aggressive action by rolling down the short leg of the diagonal spread in order to bring the net cost basis down to $2.90 from the original $5.80 paid to initiate the trade. This is still far out-of-the-money with very limited time until expiration. However, I have the wildcard of earnings in my hand.  I don’t usually want to play that. But, in this case, I think the Z position will be extended and adjusted to encompass the 11/06 report. Stay tuned.