The major banks kicked off earnings season with most reporting significantly better-than-expected results yet their stocks remain stuck in doldrums, begging the question: Is this a buying opportunity, or a value trap? This week, we saw quarterly reports from JP Morgan (JPM), Citigroup (C),  Goldman Sachs(GS), and Wells Fargo (WFC), with all delivering solid numbers but failing to get a positive response from the market. Collectively, they continue to underperform the market.  Case in point: The SPDR Financials (XLF) versus the SPDR 500 (SPY)  over the past year.

[EXCLUSIVE Sale] Access the One-Month $19 Trial Offer Our Market Experts Are Raving About —the Options360 Service! 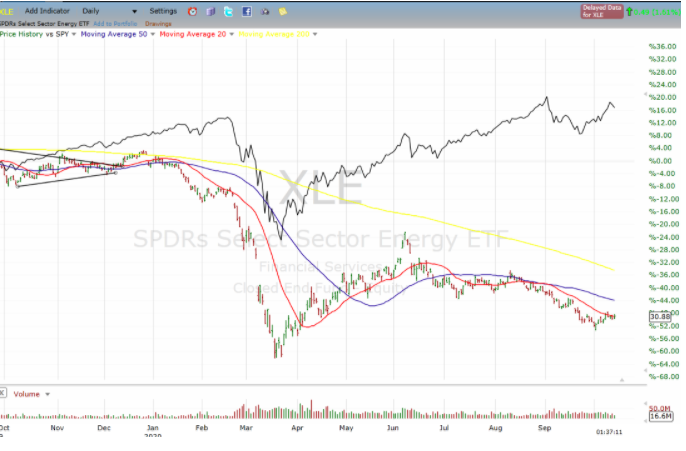 Full disclosure: On Thursday, Morgan Stanley (MS) reports before the bell and I’ve taken a moderately bullish position in what has become my favorite name in the space. The reason I’m drilling down into the bank numbers is that they provide critical insight into what’s happening in the divergent economies; that being the Wall Street v Main Street dichotomy.

LEARN About Our SPECIAL 1-Month $19 Trial Offer to the Options360 Service!

The gist from the banks’ reports showed large trading activity increases, debt issuance, investment banking, lower-than-expected loan loss reserves, and increased savings.  On the last item, savings jumped over 20%, the largest year-over-year increase. This can be explained by those who’ve retained their jobs, which tend to be high work-from-home earners who are taking the money they may have spent on restaurants or travel into the bank. The other side of the coin is the already cash-strapped hourly frontline workers, who have felt the brunt of the economic downturn.  Hence the “K” recovery in which one half (or actually a small sliver) shoots higher while the majority drops.

What seems to be holding bank stocks back is the persistence of low interest rates, which squashed the bread and butter of their earnings power (lending long-term at a high rate while borrowing at a low rate from the Fed). Presently, the spread between 2 and 10-year rates is negligible, meaning profits from traditional lending are dampened.

Also, despite a de facto Fed backstop, new loan demand has been de minimus.  Businesses, especially those on the mom and pop end of the spectrum, have been reluctant to take out loans until there’s some clarity concerning Covid.  No need to pile on debt until there’s a path to profitability.

All that being said, the banks look incredibly attractive here. Their price-to-book ratio, the standard for measuring bank valuations, is sitting around 1.01, the lowest since 2010, following the financial crisis. Throw in solid dividends and shored up balance sheets and the banks look attractive here. My top two picks are JPM and Morgan Stanley (MS).

[Last Chance] Capitalize on this Exclusive $19 Trial Offer to the Options360 Service!