Following Monday’s big pop from Moderna’s (MRNA) positive news regarding its Covid vaccine stocks, things have settled down into a relatively calm range — a welcome development as I’d been sweating out some iron condors in the S&P 500 SPDR (SPY), Nasdaq 100 (QQQ) and Paypal (PYPL), with the latter enduring a test of both inside strikes forcing me to make defensive adjustments documented here and sweat out the clock.  I can now breathe a sigh of relief as all have been closed for profits.  Whew!

The Options360 account also picked up some quick pain-free gains with a bearish play in Expedia (EXPE) and a bullish trade in Fastly (FSLY). Each had 50% returns for just 2-day holding periods. However, the position I’m most proud of is Wal-Mart (WMT), which has been playing out for the past five weeks — a perfect example of why I love diagonal spreads and use them as my ‘go-to’ options strategy for Options360 and my personal trading.

Without further adieu, let’s walk through the WMT trade as it unfolded. After initiating the trade on October 12, I identified that WMT was forming a ‘cup and handle’ pattern with solid support at the $140 – $142 level.

We noted that the company was set to report earnings on November 17 and given the attractive technical setup, we believed the stock would continue to trend higher leading into the event. Note: I didn’t plan on holding the position through the actual earnings, but we did want to capitalize on the fact that any option whose expiration encompassed the event would enjoy inflated premiums through the implied volatility increase.

It would also give us the option (pun intended) of making one last roll into the earnings event to collect rich premiums and the flexibility to hold through the report if deemed prudent. We targeted the $145 strike with a November (11/20) expiration for the call option we wished to purchase. We simultaneously sold the $149 strike with the October 23 expiration for a total net debit of $4.50.

The initial alert to initiate the Walmart trade was given on October 12 as: 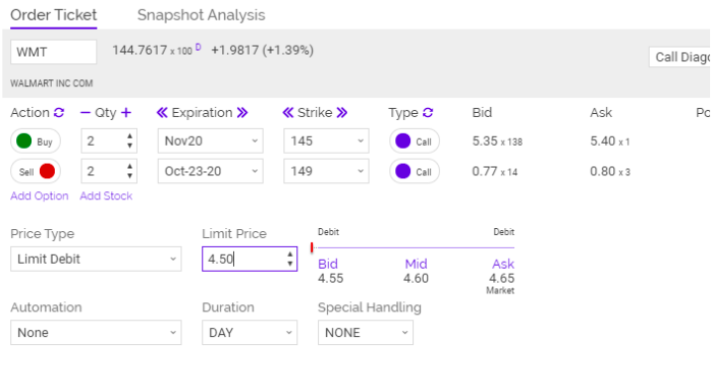 In this case. we didn’t mind paying a bit more than the width between strikes as we knew the option we owned would more than retain its value leading up to the 11/17 earnings release. The trade didn’t play out as planned, with WMT shares sliding, along with a broader market sell-off, falling to $138 in the ensuing two weeks. However, there was no need to panic. This is where the income collection component of the diagonal spread strategy kicks in.

Our first roll was taken on October 21where we closed the short (10/23) $149 call and rolled ‘down and out’ to the (11/30) $148 strike, collecting $0.55 of premium, decreasing our cost basis to $3.95. In the next four weeks, we executed seven total additional rolls, including an intra-week roll (rolling down a strike, but with the same expiration and a very defensive move of rolling ‘down and in’) where we sold a near-term call with a lower strike price than the one owned.

Here are all the transactions as recorded in our real-time portfolio tracker where all Options360 members have access.

Get full unrestricted access to my Options360 service with this crazy, insane SALE! 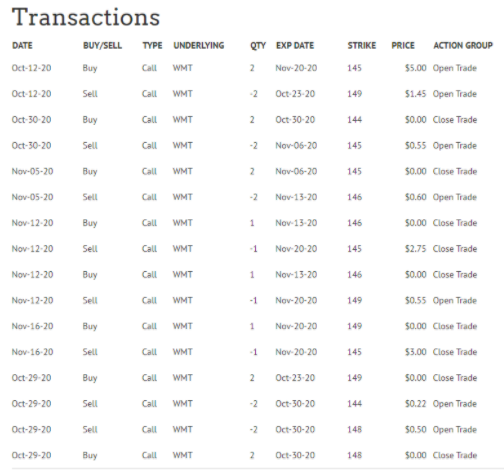 After the dust settled, we collected $4.30 of weekly premium, bringing the cost basis down to a mere $0.20, essentially a risk-free position heading into the earnings report.  On the day before the report (11/16), we closed the position for a $3.00 credit, a 105% profit, rather than risk a post-earnings sell-off.  Here’s how the trade visually played out on the chart over time and price:

This is a great example of how diagonal spreads can benefit from income generation (selling short-term premium) and capital appreciation (a directional move) to reduce risk and maximize profits. In the example above, WMT delivered a $2.85 profit on the initial $3.50 cost or risk — a nice 105% return where the stock didn’t go our way during the 35-day holding period.  This is just one recent example of how we use diagonals to achieve consistent and highly-profitable results regardless of the market conditions in the Options360 service.