This week’s headlines and trading action was dominated by the eye-popping performance of the high-profile Initial Public Offerings (IPOs) of DoorDash (DASH), AirBnB (ABNB), and C3 AI (AI) — all seeing shares double on the first day of trading.  Important to note: This says nothing of the growing list of SPAC deals, which act as de facto IPOs, seeing a surge in price once the acquisition target is announced.

I’m ignoring all of them and sticking with tried-and-true names such as Apple (AAPL) and Facebook (FB) and the option strategies I know, love, and talk about in the Options360 service.

In 2020, over 22 IPOs have doubled in price on the first day. To put this in perspective, that’s more than what occurred over the past 10 years combined!

Amazingly, these headlines give the impression that the stock market’s on fire. However, the fact is that the S&P 500 (SPDR) and Nasdaq 100 (QQQ) are up less than 2% since the presidential election.  The performance separation of this year’s IPOs — from the broader market — is truly remarkable and somewhat unprecedented. 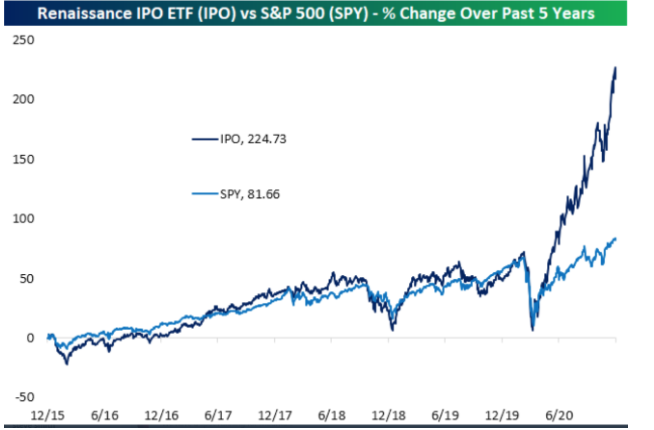 As I discussed here and here, this is all becoming reminiscent of the late ‘90s dot.com days, leading a lot of people to fear that they’re missing out on a golden opportunity for quick outsized profits.  Now, there’s certainly great wealth being created. But, I do fear that most of it’s a paper profit that could quickly dissipate — leaving investors with nothing but bad investing and undisciplined trading habits.

Admittedly, I’ve punched up some charts and tickers, seeing them up 20%, 30%, and 50% in mere days and thinking, “Dang, why didn’t I just grab some cheap call options?”

However, just as it took me years to learn not to be a permabear, or a constant contrarian, I’ve also learned that momentum trading will never be my style. Hence, I’ve been sticking to my knitting of using options strategies, which provide a solid probability of 30%-50% returns over a two to four-week period.  I know this might sound pedestrian in an environment of people bragging about overnight triples. But, that’s what works for me and the members of the Options360 service.

Claim Your Options360 Membership for the Heavily-Discounted Trial Price of $19 — Before It’s Too Late!

To that end, two new trades we recently established are a Facebook (FB) iron condor and an Apple (AAPL) bullish diagonal spread.  Somewhat ironically, this is just the second time that I’ve traded either of these names in 2020.  However, that’s how I stay in my lane and find the trades that I’m comfortable with, rather than chasing or fearing I’m missing out on some hot stocks.

The strategies I’m employing let the relative stability of these blue-chip stocks give me a great degree of control in managing the positions and comfort in my risk level.

For example, AAPL was initially established last week through the purchase of the January (1/08) 120 call and the sale of the December (12/11) 126 call — a net debit of $5.20.  On Tuesday, sensing the market may enter a corrective phase, I adjusted early and rolled the short 126 call out to the 127 strike of 12/18 expiration, collecting an additional $1.00 of premium — bringing my cost basis down to $4.20 and expanding the spread’s width or profit potential.  The position’s risk/reward is now over 1:1 with nearly a 60% probability of a profit.!