Home / Featured / Full Message / The Size of Your Trades Matters, Here’s Why

This morning, I sent an Alert to Options360 members directing them to close our position in Facebook (FB) iron condor, for what I described as a “small loss.”  I immediately received an email from a member who took issue with my description and went on to say the loss was “a third.”

We had a bit of a back and forth before ultimately coming to an agreement that one can quibble over the semantics of what’s considered small versus large. But, the numbers are the numbers.

With this in mind, I thought it would be an instructive trade walk, allowing us to analyze concepts such as position size, management, and the proper way to calculate risk/reward and the resulting returns.

Hurry up & claim your spot in the Options360 Service for the DISCOUNTED HOLIDAY PRICE OF $19 — before the deal ends!

The first important point I want to make concerns position sizing. Each year, the Options360 portfolio is reset to $10,000, it’s currently up some 45% ($4,500) to about $14,500. Therefore the FB trade represented about 3.8% of the portfolio — well within the 2% – 8% target allocation I want for any one position.  So, even under the worst-case scenario, this couldn’t result in a large or outsized loss for the Option360 portfolio.

Second, the defined risk of the FB iron condor spread trade meant that our maximum profit, if we allowed the position to expire worthless, and we collected the full $2.25 of premium, was 81% return on the risk $2.75,(2.25 divided by 275), conversely meaning that the maximum loss would be 120%  (2.75 divided by 2.25) based on risk.  These numbers are referred to as Return on Risk or ROR.   In dollar terms, we could make $450 or lose $550. Here’s a visual of the initial risk/reward profile.

Learn about the service our trading experts are saying is: “The Best $19 You’ve Ever Spent”  — The Options360 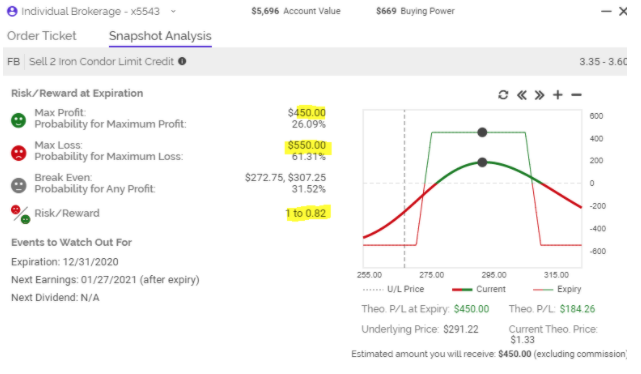 The next day, FB shares, unfortunately, dropped $271 — on mounting antitrust lawsuits news.  One day in and the position already incurred a break of the expected range. Not good.

On December 14, I made an iron condor call side adjustment by rolling down 305/310 strikes to 295/300, collecting $0.40 of additional credit.  The total premium collected was now $2.65.  While this reduced risk and increased profit potential, it doesn’t change how you’d calculate ultimate returns.

Returns must be calculated based on the initial risk!