Home / Featured / Full Message / I Remain Bullish on the Stock Market, Here’s Why 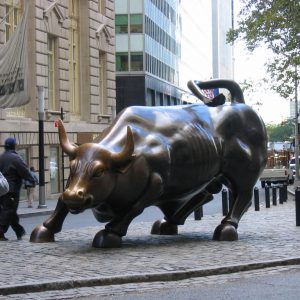 We all know that the Federal Reserve has been providing a sea of liquidity, which acts as a backstop for stock prices. You might have been cheering or decrying the Central Bank policies over the past few years, newly-appointed Treasury Secretary Janet Yellen just confirmed that the policies are here to stay.  In fact, it won’t just be easy monetary as Yellen will push for even more stimulative fiscal policy.

The proposals range from more direct payments to individuals to targeted injections towards specific sectors to broad multi-year infrastructure projects — which should keep stocks afloat for the foreseeable future.

I won’t fight it, as evidenced and discussed, 5 out of the Options360 positions have a bullish bias.  However, I’m concerned that it’s leading to ever-increasing inequality, which is ultimately unhealthy for the broad economy, and society.

Today, I want to provide a brief overview of how the structural policies are creating the relentless bid for stocks and why I’m keeping a bullish posture, despite my concerns we’re entering a speculative fever and possibly an irrational exuberance period.  Tomorrow, I’ll walk through some specific Options360 positions and the adjustments I’m making to minimize risk while maintaining upside profitability.

It’s well documented that the past 10 years of low-interest rates and the asset inflation creation has skewed benefits heavily towards the top 20%, which control over 80% of the market and some 90% of U.S. wealth.

Just as Covid accelerated trends towards digital adoption, it’s also accelerated the wealth gap.  The ‘K’ recovery has highlighted the divide of a  whole class of people who’ve had little to worry about during lockdowns, and seen their savings and wealth increase dramatically.

In fact, the accrual of wealth to the top 20%’s wealth accrual are using the money they usually spend on travel and leisure.  There’s been a lot of half-joking comments and analysis regarding how a good portion of the stimulus checks, known to tic tokers as “the stimmy”, has been plowed via Robinhood into the stock market, especially speculative SPACs or the big tech plays such Tesla (TSLA).  Memes and generational labels aside, the liquidity and buying power is real.

The ‘stimmy’ and disposable income increase are now believed to be some $1.3 trillion — nearly 25% of the total government packages. 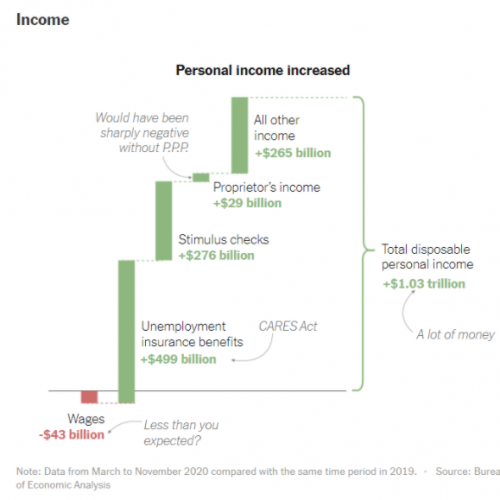 And unlike the various government programs, such as Fed-led bond-buying, or PPP, proving to have huge holes of wastefulness, the money in consumers’ hands goes directly into the economy or as we’ve witnessed, for the well-off, right into the stock market.

The math might seem disconcerting but here’s how it breaks down; while total salaries and wages fell in the aggregate, total employee compensation was down only 0.5% for those nine months, more akin to a mild recession than an economic catastrophe.

More telling is that despite jobs being down 6% and employee compensation down a mere  0.5%, the higher-paying professional jobs actually saw a 1.7% income increase.

Unlike the new cohort of 20-30-year-old who are just getting started and feel they don’t have much to lose (and have pie-in-the-sky profit expectations) the 40-60-year-old generations, that suffered through the dot.com and financial crisis, are taking a more realistic and methodical approach to rebuild their wealth — translating into a sea of liquidity ready to buy and buoy stock prices for the foreseeable future.

Meaning, I can be skeptical and trade with caution, but I’m keeping a bullish bias.

Claim this Special Deal to the Options360 Service to see how I initiate and manage these positions!