Bitcoin, along with blockchain is technology — where Bitcoin and other cryptocurrencies have enjoyed an incredible value run, garnering plenty of headlines over the past few months.

Now, I won’t make any predictions about what Bitcoin will ultimately be worth, but its recent rally stands in contrast to past runs, similar to what occurred in 2017, which saw its price drop some 90% from the then-$17,000 peak.

Learn About Options360 — The Concierge Trading Service Our Market Experts Agree Is: “The Best $19 You Ever Spent!”

A big debate between coiners is whether Bitcoin (or other crypto coins) is a store of wealth akin to gold, diamonds, or a true currency to be used for conducting transactions.  People like to label things, and I think recent developments have shown Bitcoin can bridge the gap between commodity and currency.

High-profile moves made by digital payment companies like Square (SQ)  and PayPal (PYPL), pushed this concept toward wider acceptance — announcing that they’d be buying $50 million and $100 million worth of BTC to directly keep on their balance sheets.  This is presumably the first step towards allowing customers (buyers and sellers) to seamlessly conduct transactions using BTC on their platforms without having to do cross currency translations, which carry an exchange rate and volatility risk.

This week, Elon Musk made a bolder move, buying $1.5 billion-plus worth of Bitcoin to reside on Tesla’s (TSLA) balance sheet.  Again, this carries significant currency risk given Bitcoin can have price swings of 10% or more each day.

However, as always, Musk is looking far out into the future, believing that Bitcoin will become the coin of the realm for future transactions, especially those across international borders.

We have even seen major financial institutions such as Goldman Sachs (GS) issue bullish reports and build back-office infrastructure based on blockchain technology.

I’m not very knowledgeable about Bitcoin nor, as mentioned, do I have a bold prediction for its future.   But, I see what’s going on around me and I have options at my disposal to create a low cost/high return position should the trajectory of Bitcoin keep going higher. The biggest obstacle to derailing the Bitcoin train would seem to be regulation.

The vehicle of choice is Riot Blockchain (RIOT), a company which pivoted to mining coins a few years ago.  The stock has soared 12,000% since the election.

My theory is there will be a substantial pullback in the coming months, due to regulation, dilution by some of the largest holders, a security breach, or some other unseen event.

Do Not Miss Out on This EXCLUSIVE $19 Options360 Service Trial Offer!

I’m employing a bearish butterfly spread;  A low-cost strategy with limited risk but offers tremendous upside.   If these play out over the next few months, it could return on the order of 300%.

And the real beauty, I know my exact risk. In other words, I set the position and forget it.  No adjustments, rolls, or worrying.

Here’s the exact set up of the RIOT butterfly:

Note, this is an ‘unbalanced ‘fly’, so you may need to enter as a custom order. 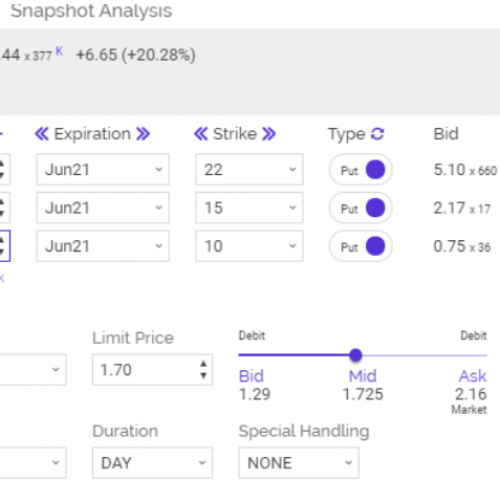 Butterfly option strategies are employed very selectively, but they can deliver outsized returns.

[Last Chance] Claim Your Special Deal into the Options360 Service for just $19!