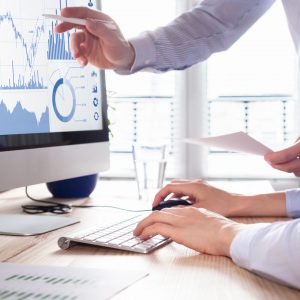 It was a wild week for the markets — not just the general sell-off but also the intraday swings, making it a bit of a daunting step into the fray with new positions.

Thankfully, I’ve been pulling in my bullish horns since I wrote “Will Raising Rates Derail the Market” on Feb. 17.   That proved to be the first day of what has now turned into a full 10% correction for Powershares Nasdaq 100 (QQQ), 6.7% for SPDR 500 (SPY), and the iShares Russell 2000 (IWM) dropping 6.5% in the last three trading sessions, finally succumbing to the selling.

Regarding the IWM trade, you may recall me posting on Wednesday that I took a bearish position through a put spread — believing that after three weeks of outperformance, it would play ‘catch up’ to the downside.  Indeed, its 6.5% decline is nearly double the losses of the SPY and QQQ over this three-day span.

This woosh down allowed Options360 Service members to close the IWM trade today for a 47% gain. in just the two-day holding period!

This one trade would have paid for a year of the Options360 Service. Make sure to be in the next one with this Special $19 Trial Offer!

Unfortunately, I’ve been unable to act on some of the other bearish ideas, such as Caterpillar (CAT) and Beyond Meat (BYND), which  I previously mentioned this week.  I didn’t pull the trigger simply because the stocks have continued to head lower and my style doesn’t allow me to initiate positions unless the setup is against identifiable resistance levels, which provide defined risk/reward parameters.

While shifting to a more cautious tone and actively seeking some bearish positions gave us a good win in IWM, it doesn’t mean some existing positions aren’t taking hits.  Specifically, some positions such as Mosaic (MOS), Pulte Homes (PHM), and Pure Cannabis ETF (MSOS), which had been holding up very well early in the week even as the broad indices sold off, have succumbed to selling over the past two days.  The positions’ open profit and loss (PnL) has slipped from profits to breakeven.

The key phrase here is they still are open positions, each with over 60 days remaining until the long call portion of the position expires. And that is the beauty of options.  I’ve already made adjustments in MOS, and PHM to reduce the cost basis and will continue to do so as time and price dictates.

Defining my risk from the get-go, the flexibility of options to make adjustments, and going for consistent, realistic gains rather than swinging for home runs is what keeps me and Options360 Service members in the game for the long term.

Sticking with my “grind-it approach,” the Options360 Service is up 12.2% year-to-date on closed positions.  That stands in contrast to the SPY which is now down 0.05%.

That doesn’t mean I don’t have my work cut out for managing the above-mentioned positions or identifying new opportunities.  But, if I stick to my discipline, the profits will continue to outpace the losses.