The CBOE Volatility Index (VIX) is often referred to as the “fear gauge” as it tends to rise as uncertainty and concern enter the market.

It definitely earned that moniker last March when the COVID-19 pandemic forced businesses to shut down and people to fear for their lives.

However, as its concerns have receded, so has the VIX — drifting back to its lowest levels since last February.

One might argue that both people and the market have become too docile.  Tonight, President Biden is set to propose a controversial $1.5 trillion stimulus package, to mostly being paid for by higher taxes from the wealth accumulated in the stock market by both corporations and individual shareholders, which could create stress among market participants, if not a route of selling.

During stressful times such as the present, the structure goes into backwardation where near-term VIX futures are at a higher level than longer-dated ones.  This is a function of the fact that the VIX’s mean reverting with the expectation that over time things will normalize.

As you can see below — back in March VIX — futures traded at 45, well above the VIX’s 34 reading.  However, the July futures are at just 29, or an even steeper discount than the VIX “cash.”  This speaks to the “reversion to the mean” nature of volatility. 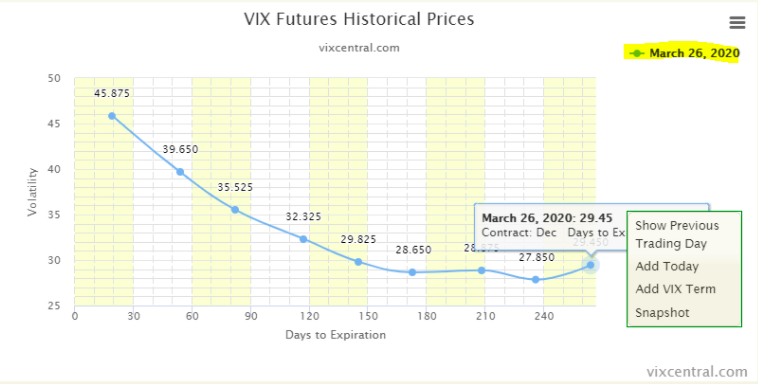 While the VIX’s a widely watched gauge, one cannot trade the actual Index.  But, there are various VIX-based products that can be traded for both speculation and hedging purposes.  The challenge is that these products are complicated and tricky instruments with a variety of nuances that many individuals may not be aware of.

A popular VIX-based product is “iPath S&P VIX (VXX),” which is an Exchange-Traded Note (ETN).

The VXX comes with its own quirks, namely that, over time, its price heads towards zero.  You can see that even with the recent volatility spike, the VXX remains well below where it was a year ago. 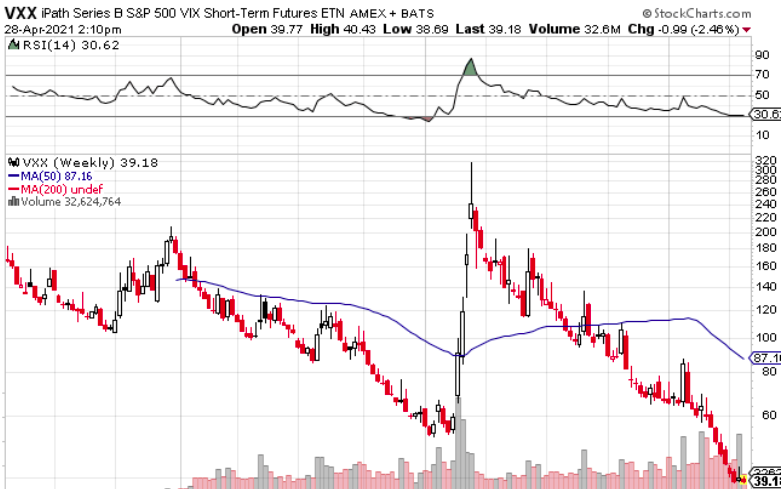 However, in the short-term, if one can time it right, it’s a powerful tool for both hedging and speculation.  I think that we will get a short-term spike in volatility over the next few days.

[FINAL OFFER] Take advantage of this special $19 offer into The Options360 Concierge Trading Service before it’s too late!