As expected, stocks and bonds are trading in a narrow range ahead of this afternoon’s Federal Reserve meeting. However, one could say the broader indices such as S&P 500 (SPY) and Nasdaq (QQQ) have been mostly range-bound and relatively docile for the past few weeks, which belies the sharp rotations occurring in sectors and individual names below the surface.

But, the fact remains that the SPY has been in a very orderly trend higher, not recording a daily move of over 1% for the past five weeks. QQQ has only had two days with a 1% or greater move during the past three weeks.

This explains why the CBOE S&P 500 Volatility Index (VIX) has declined to its lowest level since the pandemic, dipping below 16 yesterday — only slightly above the 20-year medium reading of 15.

However, this isn’t to say traders are complacent.  The VIX has moved lower in a grudging fashion, basically forced to revert to the mean as 20-day realized, or historical volatility is sitting around 7.37, meaning the VIX’s still trading with over a 100% premium. The chart below, where HV’s highlighted, the cash VIX being the green dash, and VIX futures are the blue line, which is clearly in contango  (later date higher than a front month) shows that a lift in volatility’s priced in, but expectations are for it to work higher over the next few months.

Jump on board Options360 Concierge Trading Service for just $19 for the first month. It will be, as our trading experts put it: “The best $19 you’ve ever spent.” 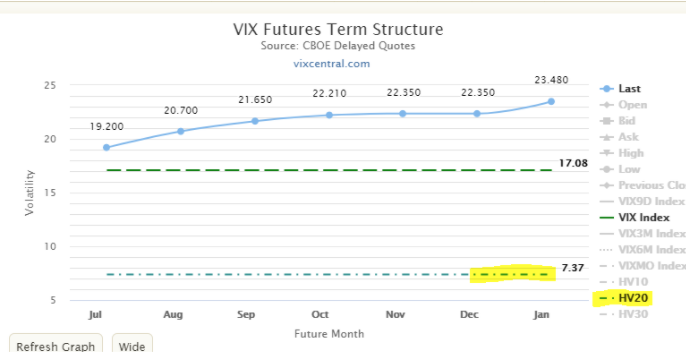 I point out these relative values between historical vs implied vs the futures skew because many people see the VIX print at 16 thinking it’s attractive get-long volatility.  The problem is you can’t trade the VIX cash index, you need to trade the futures, which have already priced in expectations to turn higher in coming weeks and months, or an ETF such as the iPath S&P 500 Volatility (VXX).   Here,  I discussed some of the challenges in using the VXX with the main issue being the structural headwind it faces during periods of contango and the daily rolls to maintain a 30-day measure to force VXX to sell low and buy high.  This is why the VXX has a bias to head towards zero over time forcing it to undergo multiple reverse splits.  On a split-adjusted basis, it has dropped from $16,000 to the current $30 over the past decade.

What I’m trying to get across is that it’s only wise to trade the VIX-related products with an understanding of how they’re structured and what they’re priced against; i.e. buying a VIX 20 strike which expires in July, and is tied to the July futures which are currently trading around 20, meaning it’s at-the-money and not “cheap,” relative to the 17 reading of VIX cash.

My approach for the Option360 Trading Concierge service has been to employ backspread strategies, which consist of selling near-the-money options and buying a greater number of out-of-the-money options. Ratio backspreads benefit from a sharp directional move and an implied volatility increase. In the Options360, we add a little twist by using different expiration dates, which allows for greater flexibility in adjusting and usually provides positive theta or time decay.

For example, as I mentioned in yesterday’s article, How I’m Positioning for the Fed Meeting,  I used the put options in the QQQs to establish a ratio backspread as a hedge against the portfolio’s bullish positions.

However, the purpose and expectations for this position were not as a quick-day trade.  We already have a limit order in place to roll the short leg down and out the Friday expiration, which will cut our cost basis by a third. We then have the opportunity for another two rolls next Monday and Wednesday.  Or, if the QQQs do tank over the next few days, to close the position for a healthy profit which would mostly offset any drawdown in our individual bullish positions.

[LAST CHANCE] To see how this, and all other Options360 Concierge Service trades, play out in real-time take advantage of our one-month trial for just $19.