Last Tuesday on the Earnings360 training webinar, I described the PEPE (Pre-Earnings Premium Expansion)  strategy and executed a live trade in JP Morgan (JPM) to illustrate the ease and conservative nature of this approach.

The result? We booked 23% over the 3-day holding period!  Not too shabby for a near-riskless strategy. To top it off, the service had not even started.

Earnings360 officially kicked off today by placing two new trades, one is a PEPE in Capital One Financial (COF), the other I can’t discuss yet as we‘re waiting to get it filled.  However, it involves the Post Earnings Premium Crush (PEPC) strategy, where we harness the decline in implied volatility after the earnings report is released.

Now, let’s bring Post Earnings Premium Crush (also, “PEPC”), the quick-witted cousin, into our tool belt, where we rely on predicting implied volatility’s decline, or revert to the mean, once the earnings report’s released.

Take a look at Netflix’s (NFLX) implied volatility (gold line) vs. its realized volatility. Can you guess when the earnings reports were released? 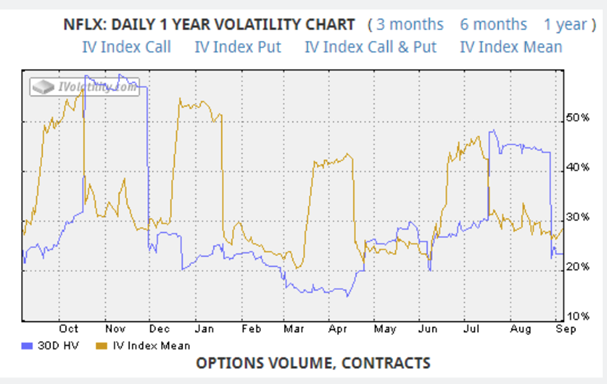 This very simple but often-overlooked meaning of an option’s implied volatility is a powerful tool for producing consistent and predictable profits in seemingly irrational earnings report responses.

I can’t tell you how many times a company delivered the triple play of “beat on revenue, beat on EPS, and raised guidance,” only to be smashed with a sell-on-the-news response.

While the Earnings360 option-centric approach isn’t a guarantee, it does stack the odds considerably more in our favor by getting the PEPC tailwind at our back.

Today, we executed a PEPE trade in COF, which reports next week, and entered an order employing the PEPC strategy — the name I’m not at liberty to say because, as of midday, it hasn’t been executed.

But fret not, there are still another 30 trades coming over the next six weeks. Don’t miss out.