In a week chock full of high profile earnings reports the top story grabbing the headlines was Tesla’s (TSLA) surge through $1,000 per share and achieving a $1 trillion market cap.

The company did have some substantive news such as increased production targets and the deal with Hertz (OTC: HTZZ) to buy 100,000 Model 3 cars and subsequently announcing it will have 50,000 of those vehicles available to Uber (UBER).  This certainly cements TSLA as the market leader, and almost the default name when referring to electric vehicles, much like Xerox (XRX) used to be synonymous with making photocopiers.

But it still left plenty of room for people scratching their heads on how an approximately $3 billion purchase order could lead to a $100 billion increase in market cap and making TSLA worth more than the entirety of the rest of the auto industry.  Sure, it could create a flywheel effect by turning car renters and rideshare passengers into potential customers creating more value than the actual sticker price but c’mon, this is just another example of a disconnect between price action and fundamental valuations.

I’m not here to argue whether this makes sense or not but rather to shed some light on what is driving not just TSLA and a handful of other hot, meme or momentum names, higher.  The answer is options; options continue to be the tail which can wag the dog of daily price action.

More specifically what we are witnessing is the weaponization of a ‘gamma squeezes.’  Gamma squeeze is something I’ve written about multiple times as going back to late 2019 when Softbank’s massive call buying in FAANG names caused a parabolic move in the Powershares Nasdaq 100 (QQQ),  to Gamestop (GME) saga, and more recently the Archegos pump and collapse in media names such as Viacom (VIAC).

For a quick recap, a gamma squeeze is created by the dynamics of the market making firms which facilitate trades, meaning  when someone buys calls, a dealer must buy stock to hedge the delta exposure generated by those options trades. If the stock keeps rising, it forces dealers to buy more shares.  This can become a turn into a feedback loop of what George Soros referred to as reflexivity.

Bloomberg had a nice chart showing when and where the pressure points of delta hedging created gamma squeeze during the course of the day in TSLA on Monday when the stock surged over 12% on the day. 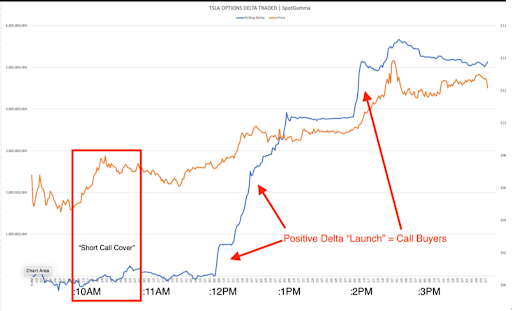 All told, traders spent $16.1 billion on TSLA options premium on Monday, more than on the S&P 500 index, FAANG stocks and dozens of other popular stocks combined.  Most of that was concentrated in weekly options and strikes that initially started well out-of-the-money.  They finished well in-the-money with people making or losing 500%-1000% on some strikes.

I haven’t figured out a way to game or profit from this phenomenon but as someone that trades with a premium on risk management it is a market dynamic one needs to be aware of, as players both big and small increasingly employ options to drive underlying stock prices.