There’s a running narrative that inflationary is leading to a rise in interest rates, which in turn, is causing the sell-off in technology names.  The fundamental reasons why higher rates would hurt high valuation names is simple and holds some truth; as companies’ shares get priced on expectations of future profits (discount cash flow model (DCF)); if interest rates are low and money is cheap, it makes the opportunity cost of speculating on higher future returns attractive.

So yes, higher rates should and would impact both the availability of cheap capital for young and unprofitable firms as well as give investors an alternative for allocating assets into safer income generation assets such as bonds.

But, to say the carnage we’ve seen in many market pockets is strictly due to rising rates is patently wrong.  To be clear, the Power Shares Nasdaq 100 (QQQ) saw knee-jerk sell-offs in March and early September when bond yields ticked higher.  However, keep in mind that yields are still well below pre-pandemic levels and the QQQs have hit a record high.  And there remains a sea of liquidity for “disruptor” companies to access and investors need to deploy.

The selling currently working its way through various sectors and assets all have one thing in common: it’s inflated with unstainable valuations.

Death has already crept into the SAAS (software as a service) sector with names such as Salesforce (CRM), Service Now (NOW), and Workday (WDAY) are all now down some 15% from their recent highs.

The next groups that need to be reevaluated (go down) are in the Electric Vehicle (EV) space and then Crypto. As mentioned in this article, I don’t play in either of these sandboxes. But, I’m an interested observer as to how the price in these groups spills over into more mainstream sentiment.

Learn how to build wealth the Options360 Way for the LIMITED-TIME blowout price of $7!

Anyway, back to valuation issues. The DCF has limitations, primarily because it relies on future cash flow estimations, which could prove inaccurate.  SPACs had been given a lot of latitude to project revenues over the next 3-5 years, which are somewhere between widely optimistic and lies of whole cloth.

Instead, investors seem to be looking at price-to-sales (P/S) because, unlike other accounting measures such as earnings or book value, sales are much harder to fudge, you either have them or you don’t.

Right now, investor expectations for the future are some of the highest on record. How so? Because the number of stocks with elevated price-to-sales (P/S) ratios has increased rapidly in recent years. Why is the P/S ratio the relevant metric here?

This is due to it now reaching obscene proportions — surpassing even the dot.com bubble, which was defined by profitless companies, burn rates, and a sock puppet (AKA as Pets.com) storming into the Superbowl.  Last week, the venerable home to the Lakers, which had been labeled the Staples Center, shall now be known as the Crypto.com Arena. 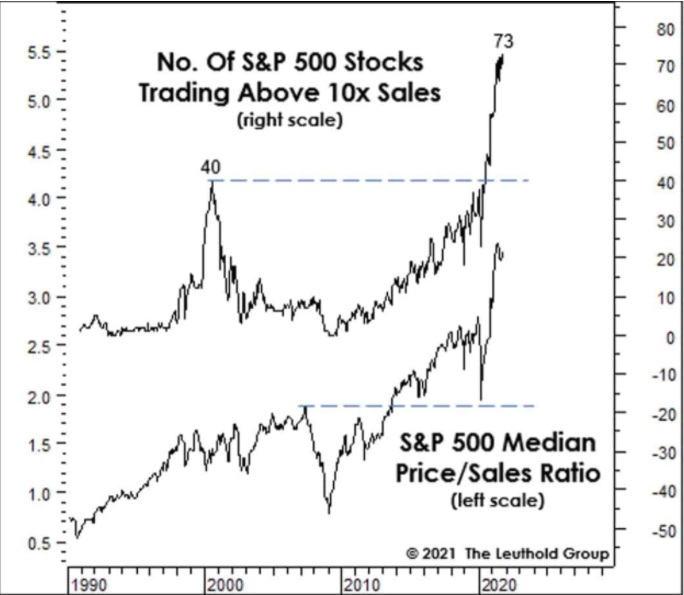 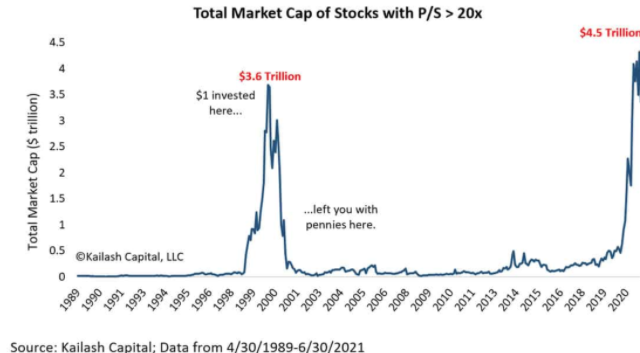 Of course, knowing things are getting out of control along with these valuations doesn’t necessarily help us make money. It feels like we know better and what we’re seeing isn’t sustainable, yet many are participating on the belief they’ll get out before the bubble bursts.  Again, I just watch in awe from the sidelines and think of what famed investor Stanley Druckenmiller said after losing over $3 billion trying to short the dot.com bubble too “early.”

“You asked me what I learned. I didn’t learn anything. I already knew that I wasn’t supposed to do that.”

In a sense, it’s been very healthy. Much of the froth has been removed, and some of the bubbles pricked while the major indices remain robust. The last thing the market needs are mainstream news headlines blaring about a Dow crash, which would lead to widespread selling.

And it would be ascribed to the wrong reason of inflation and rising rates when what’s occurring is simply a revaluation of what had been irrational valuations.

[Last Chance] Options360 Trading Concierge Service is now up 52% in 2021! CLICK HERE to claim your spot for the Black Friday sale price of $7!