In November, I mentioned that I expected volatility to increase and remain stubbornly high through the remainder of 2021. Indeed, we have some big swings that are climbing the ranks at historical rates.  This includes seeing the major indices such as the SPDR S&P 500 (SPY) and Powershares Nasdaq 100 (QQQ) enjoying (or suffering) daily moves over 1.5% for 10 of the last 13 trading days; the 3rd such occurrence in the past 30 years.  Likewise, the VIX has surged (or declined) by over 15% for 9 of the last 15 days, ranking the 5th most volatile two-week period in the past 20 years.

I’m loving this.  This type of two-sided action, with big intraday price swings, is throwing pitches right in my wheelhouse.  It has allowed me to meticulously initiate positions in the SPY and VIX in anticipation of a Santa Claus Rally.  I can now reveal how I constructed this position. My Options360 Concierge Service is locked in for a 22% gain, even if I did nothing for the next two weeks.   Larger profits can accrue if we make some deft adjustments between now and the new year.

Let’s back up a bit so I can give you a short walk-through of what Options360 Concierge Service members have been doing over the past two weeks.

On December 2, when the VIX crossed above the 30% level, Option360 received an alert to initiate a bear put spread in the VIX 26/23 strikes, expiring on January 19th. We paid $1.80 for this $3 widespread which would benefit if the volatility of VIX declined over the next three weeks. This was basically an anchor position assuming markets, while on edge, wouldn’t unravel heading into 2022.

Our next action was to initiate two bullish butterfly spreads, which gave us a low cost but high reward if SPY shares moved back to the $470-$475 highs coming into the new year.

Here are the positions and the risk or p/l profile for each:

Try out the service that’s delivered profits to its members EVERY SINGLE YEAR since starting — the Options360 Concierge Trading Service. 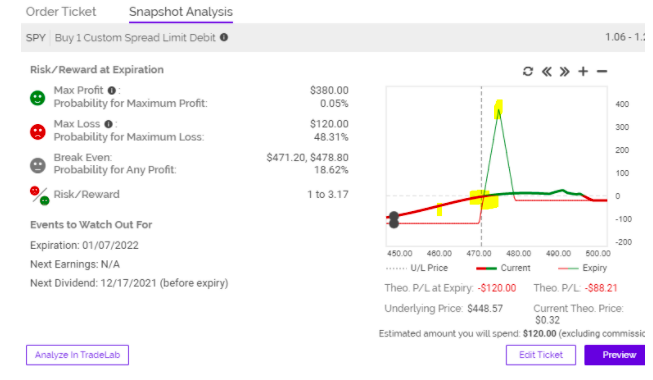 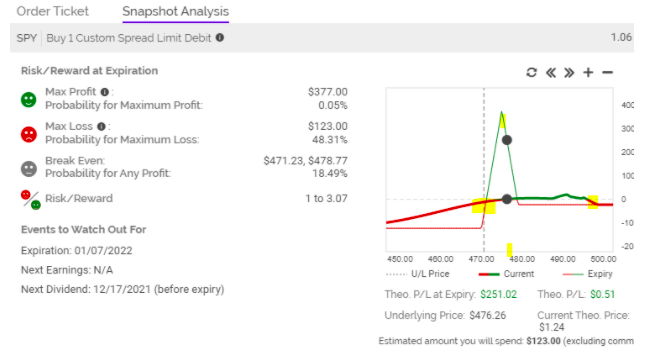 We need time to move fast and the prices hold still.

The next moves were hedges both ahead and after yesterday’s Fed meeting.

Lastly, as the SPY ripped higher yesterday, following the Fed meeting, Options360 members received an Alert to buy some put protection; specifically the December (12/23) 458 put for $2.00 debit.  With the market in threat this afternoon, we executed the sale of a Dec (12/17) 456 put for $0.30, creating a short-term bearish diagonal.

Oh my, I know it’s too much to digest if you’re not in it.  My reason for running through the trades is to provide a window into my process. To show how I start with a basic thesis.  In this case, the combination of that volatility would subside by the end of December and we could be setting up for a Santa Claus rally.  When I show you the step-by-step action in each Alert, you’ll see it’s not complicated.  We’re using our knowledge of option pricing and probabilities to leverage a volatile market to create a dynamic options position, which now has a very attractive risk/reward profile.

By being patient and legging into each part of what’s ultimately an interconnected position, the Options360 Concierge Trading Service, still up 59% for the YTD,  is set to glide into the New Year with very little risk but plenty of upside.

[Last Chance] To see how this plays out, and get in on the next new trade don’t pass up on this awesome offer of just $19 per month.