In mid-December, I wrote how Options360 was positioning for the “Santa Claus Rally”, which is the concept that stocks have a bullish bias during the 7 trading days from Christmas Day through the first two days of 2022.

It played out well and helped the Options360 Concierge Trading Service to close at an 82% peak performance in 2021.  But, despite a small January effect in some cyclical sectors such as oil,  it all got wrecked. Assuming the SPDR S&P 500 (SPY) and Powershares Nasdaq 100 (QQQ) close out the day at current levels, it will go down as the worst January in history.

Options360 started 2022 hot by being very selective in trade initiation and closing positions, for both profits and losses, within a couple of days.  This pushed the portfolio up some 9.8% over the first two weeks.  However, things have gotten tougher and it’s now up only 4.2%, a drawdown to be sure. But still far better than the respective 19% and 9.8% drubbing the QQQ and SPY have suffered.

So, where do we go and how do we trade from here?

1. Let’s start with a bold prediction.  I think new lows will be made by mid-March ahead of the next Fed meeting.

2. The first and most important part of my reasoning is that we’re moving from an unprecedented loose monetary policy (zero rate in hindsight) to what’s promised to be fast-paced and methodical tightening which will combine QT and rate hikes.  On the fiscal side, there will be no more stimmy checks to pump memes and NFTs.  Oh wow, RobinHood (HOOD) just erased the 10% initial post-earnings and is now up on the day.

3. Which segues to the persistent muscle memory of the “buy the dip” mentality.  Optimism, while usually rewarded, dies hard. Even as the indices have suffered their worst Hnaury ever and entered correction territory, retail traders are still pumping money into the stocks.

According to the JPMorgan (JPM) report, “ investors emboldened by a strategy that worked all of last year, plowed more than $1 billion into tech in recent days, with nearly every other sector also getting deposits. JPMorgan, Chase & Co. said it saw the strongest retail flows on record, with at-home traders adding $5.9 billion to equities in the week through Wednesday. “

We saw what happened when everyone piled into ARRK near the highs.  They’re now down some 45% and facing a hard decision; cut bait or cast more money into that big blue sea hoping to land the great big disruptor.

4. Option data flashing warning signals.  Typically, any sentiment indicated, including option gauges, act as a contractarian indicator.  That’s when things get too bearish or fearful it can be a sign of marking a low.

The problem right now is that while Monday’s low marked a capitulation, the sentiment gauges have been reluctant to back off and still show a higher degree of concern. 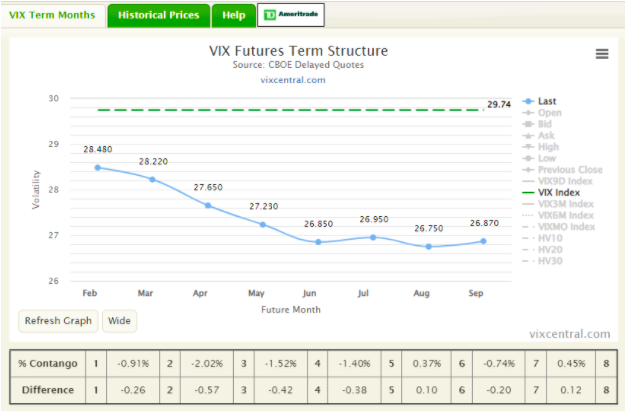 5. Ultimately, these will revert. But, it may take a whole lot more pain of lower prices before it hits an extreme leading to a wash-out low.  See #3 where a lot of new investors are clinging to underwater positions.  Diamond Hands will feel the pressure and turn back into coal.

6. The most notable outlier of the recent price action was that as stocks fell, bond yields rose. This has never happened before.  Typically, when stocks decline, people flock to the safe haven of bonds.  Not this time.  It speaks to the regime shift of massive liquidity and zero rates to a tightening amid an inflationary environment.

7. Topping is a process and it’s just as crucial not to avoid each dip as buying opportunities as it is to sell daily rips.  Keep in mind the dominant trend of lower highs and lower lows.   Right now, we’re in the chop and the bulls need a close of SPY above.   The market moves from Balance > Trend > Balance. When in balance, the edges.  When it breaks out of balance. go with the trend on the balance retest once it’s confirmed.  Look for good entry points on each side,

Disclosure: Today Options360 initiated a short position in  Schwab (SCHW) and has a working order to short the SPY if it gets to the $441 level.