Lately, it’s been an extra-tricky market, and still, no real bounce in “profitless disruptors.” Case in point, ARK Innovation ETF (ARKK) already shedded 65%-85% from its peaks laying just near 52-week lows.  However, there’s no real panic with mega-caps such as Apple (AAPL) and Alphabet (GOOGL) now being value names, and timely rotation into cyclicals paying off.

Take advantage of this $19 trial membership into the service that delivered its members 81% PROFITS IN 2021 — The Options360!

It feels this has been very controlled, fairly well-absorbed selling across the US indices.  Where is a $VIX 30+? Where is the backwardation term structure? I’m beginning to wonder if those working on the bid side will once again be rewarded.

Given how mainstream media mostly reports on headline indices, it’s easy to overlook just how much damage has been done in tech land below the surface.  The dichotomy has been a theme that we’ve been beating on for six-plus months. It’s seemingly a case of the unaware frog slowly being brought to a boil in a pot of water.

With the QQQ dropping 10% to hit the official ‘correction’ territory, it seems investors have become all too aware of the hypothetical dead frogs rotting in their portfolios. And like clockwork, this is when people wave the white flag.  Indeed, the latest data indicates that allocation to tech decreased to its lowest level since 2008. 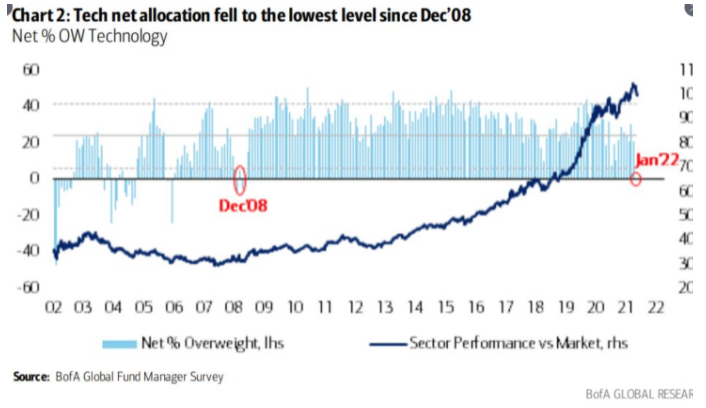 Thus far, patience and taking quick profits have worked well for the Options360 Concierge Trading Service, which closed out last year up 82% and is already up 7.8% in 2022; compared to the SPY and QQQ down 4.9% and 8.7% for the year-to-date.

But, now I’m ready to start to act more aggressively and start picking among the tech names that I think could post 25%-50% gains in the next six to eight months.

Here are 3 names I’m targeting right now to establish bullish positions in the next week or two.

The company went public in the summer of 2020 during the speculative frenzy for ‘disruptive tech.’ It quickly saw its market cap soar to $150 per share; nearly $25 billion or some 250% above its IPO price.  The market cap has since been knee-capped down $2.1 billion ($30 per share).  Yet, the company is still projected to grow by 45% this year and cut the EPS loss in half by the end of 2022.

To access these trades in real-time, sign up for the Options360 Concierge Trading Service now for the special trial price of $19!

I can see BIGC getting back to the $50 within the next six to eight months, a 65% gain.  This could be magnified by the proper application of the options strategy.

2. Unity (U) is another fallen angel.  It operates a platform of 3D software and stands to benefit from increased augmented and virtual reality… and of course, the metaverse.

Its share and market cap have plummeted over 40% in a mere three months.  This may take some time to build a new base. However, I’d be a buyer around the $110 level with a price target of $150 within the next year.

3. Palantir (PLTR) is somewhat disliked, or shall I say… looked on with distrust by the public majority due to the business’s nature, which is working with gov’t agencies in surveillance of big data.

“We build and deploy software platforms for the intelligence community in the United States to assist in counterterrorism investigations and operations. The company provides Palantir Gotham, a software platform for government operatives in the defense and intelligence sectors, which enables users to identify patterns hidden deep within datasets, ranging from signals intelligence sources to reports from confidential informants, as well as facilitates the handoff between analysts and operational users, helping operators plan and execute real-world responses to threats that have been identified within the platform.”

You may not like the nature of the business, but it’s one of the most secure and best-paying clients you can have.

[LAST CHANCE]  Claim your $19 Exclusive Offer into what our experts are calling “The Most Incredible Trial Subscription Ever…” — The Options360 Concierge Trading Service!