Last week, I pointed out how the prior Monday had all the signs of short-term capitulation as many readings — such as breadth and down volume along with option gauges such as the put/call ratio and the VIX — reached extreme readings.  That made Options360 getting long the SPDR S&P 500 (SPY) for a bounce off of the oversold levels a fairly easy trade; we secured an 81% return for the 3-day holding period.  Now comes the hard part.

Friday’s astonishing late day-reversal on increased volume by the S&P 500 Index with follow-through action creates a bit of a dilemma. Either the reversal halts the decline or it becomes the first point of a continuation pattern where we get face-ripping rallies within the broader and longer-term downtrend.

One data point suggesting we could be in for a more sustainable rally comes from the high level of bearishness reached in the past two weeks. The All-American Sentiment survey, which acts as a contrary indicator, hit an extreme of over 30% more people being bearish than bullish. 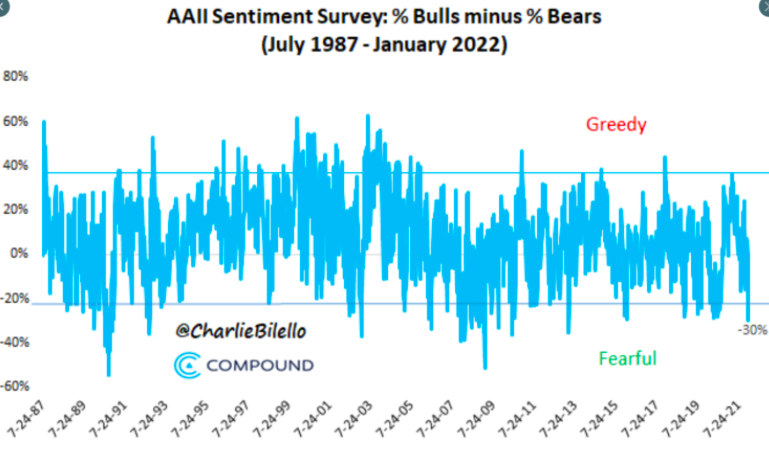 Since the financial crisis, this has occurred five prior times, and in each instance, the SPY was significantly higher three months later. 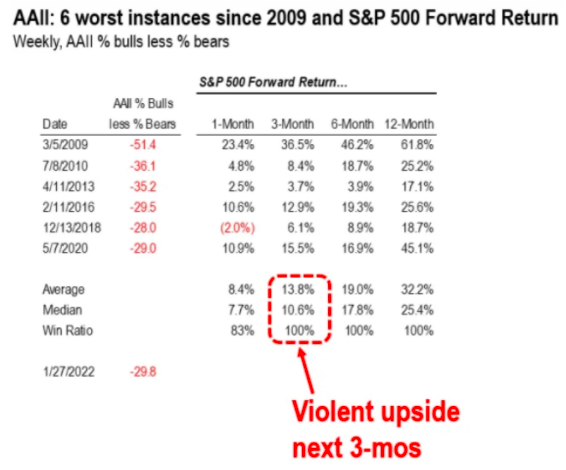 But I’ll reiterate, this is only a small sample set and it comes during a secular bull market where there was an accommodative Federal Reserve and people were not yet conditioned to ‘buy-the-dip.’  With the scars of the financial crisis still fresh for many investors, the market really could climb a wall of worry.

CLICK HERE to make sure you don’t miss the next, great trade…

We’re now in a different environment; the Fed’s about to start draining liquidity and raising rates.  And people, especially new investors, are still of the mindset that stocks only go up and dips are made to be bought. 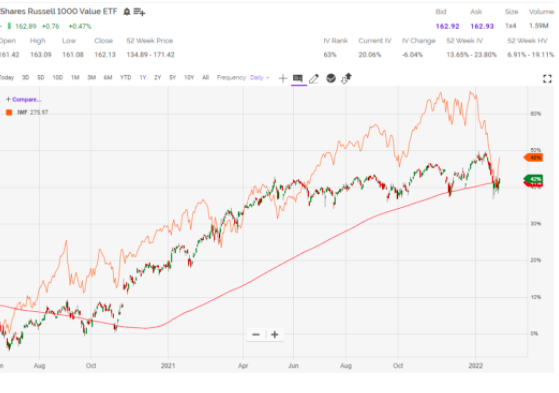 But as you zoom out, you can see how the growth began to vastly outperform value once the pandemic lows were hit in March of 2020.  Note, today’s rally’s being led by big bounces in the most oversold names or the profitless ‘disruptors’ whose valuations went insane during late 2020. If you expect a further reversion and valuations continue to get re-rated, then growth stocks still have a long way to come down before realigning value. 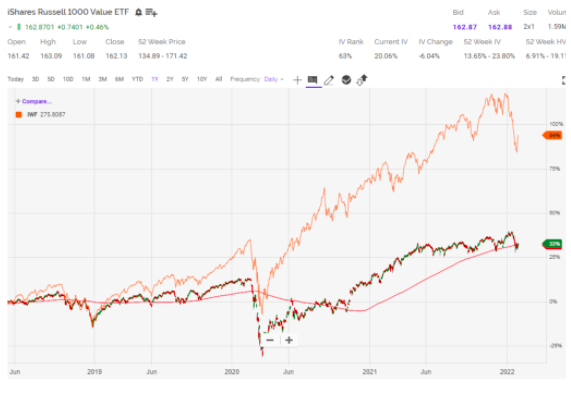 Few market observers can seriously dispute it was oversold last Monday and due for a bounce. During sustained pullbacks or bear markets, shorts typically cover on Friday to reduce risk from a surprise event over the weekend with the potential to turn sentiment positive thereby increasing the odds in favor of short covering for a good part of Friday’s 105.34 point gain.  Today’s rally’s being led by the most beaten-down names, suggesting continued short covering.

I’m between where we head from here. So, I’m going to let levels dictate how I position myself for the next few days.  To be bullish, I’ll want to see two consecutive closes above the 200-day moving average to turn bearish. Pick your spots carefully,