The market continues extending higher off Monday’s “capitulation bottom.” However, everything might change when Fed Chairman, Jerome Powell, speaks at 2:15 PM ET today.  I don’t like to be in the prediction, especially when I might have egg on my face by the time this reaches your inbox.  But, I do think stocks will respond favorably and push higher following the meeting.

Take advantage of this $19 trial membership into the service that delivered its members 81% PROFITS in 2021 — The Options360!

In addition to Monday’s low providing a short-term low from a technical point of view, we also now have sentiment believing that the Fed will take an extremely hawkish tone.  Some economists and analysts are predicting 3, 4, and even 5 rate hikes this year.  No way that happens. The Fed hasn’t even begun to taper the Quantitative Easing (QE)  policy and is still buying some $80 billion in monthly assets. It’ll take them months to reduce that to zero before it starts shrinking its balance sheet in what is being referred to as Quantitative Tightening. (QT).

We may get one rate hike in March just so the Fed can maintain a modicum of credibility regarding its commitment to fight inflation and intention, at some point, to normalize rates.  But that’s it, they’ll be one and done.

Part of the reason is that the market, and to an extent crypto with its recent pullbacks, have already done some of the work for Powell by taking the froth off the most speculative pockets. Basically, asset inflation has mostly been pricked.

This is not to say that stocks are now screaming value, far from it, but many names are no longer insane. Microsoft’s (MSFT) earnings report, which has pushed the stock up some 5% on the day, shows the mega-cap names are still generating sufficient growth and profit to justify their lofty stock prices.  And again, I need to repeat, the major indices cannot suffer a true bear market without a major decline in the top 6-7 stocks which represents 25% of the SPDR S&P 500 (SPY) and some 40% of the Powershares Nasdaq 100 (QQQ) allowing the headline indices to mask the destruction occurring beneath the surface.

The selling which began in the summer by taking out the SPACS, and then moved up the food chain from profitless companies to high p/e software and cloud plays, finally came for a pound of flesh from Apples (AAPL), Amazon (AMZN), and MSFT.  We need to add a new door labeled FAAMG to this image.

Yet, even with its recent declines, the QQQ is just 12% below its all-time high.  A clearer view of what occurred to the average stock is provided by the Nasdaq Equal Weight ETF (QQQE) which is 31% off its high; nearly three times worse of a performance.

Here’s another good image showing how the froth has come out of the most speculative names for which we’ll use Cathi Woods Ark Technology Innovation Fund (ARKK) as a proxy. 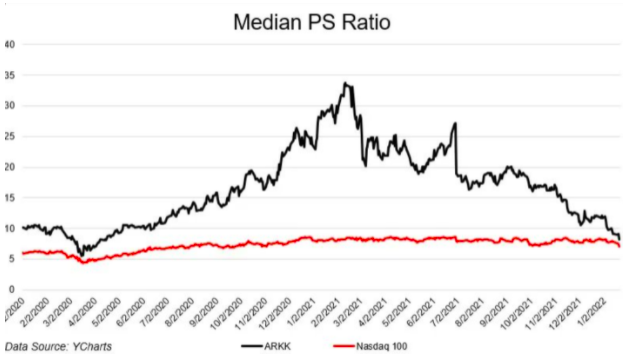 But to keep things in perspective, the mere fact we’re measuring many stocks on a price to sales (P/S) ratio rather than price to earnings (P/E) indicates there are still plenty of names that not only will have trouble growing into their valuations but may still have more to fall.

Indeed, if we go back to the QQQE equal weight, we see P/S is still some 20% higher than the peak of the 1999 dot.com bubble. 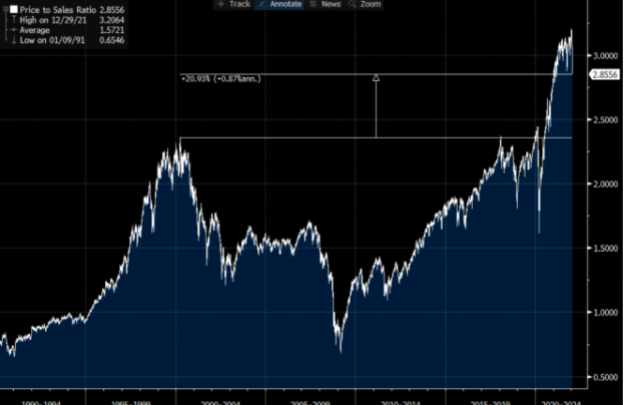 All of this might seem like I’m talking out of both sides of my mouth.  Here’s my bottom line:

I think Powell strikes the right balance of showing he intends to maintain a path towards QT but refuses to commit to a specified number of rate hikes.  This will allow the market leader and relative value stocks to resume an upward trajectory.  This will prevent a ‘bear’ market in the headline indices.

But, many of the AARK bubble stocks will remain depressed and are likely to drift lower.  A few of the names I’d look to short on rallies include Affirm (AFRM) Toast (TOST) and Cloudflare (NET) which despite having already dropped some 65% or more, still trade at over 25x sales.

Okay.  It’s about 30 minutes until the Fed and Options360 Concierge Trading Service’s riding our bullish SPY position and a recently added long in Matterport (MTTR) into the storm. Let’s see how it plays out.