Yesterday, I wrote that the market must see improved breadth for a break out of the choppy range it’s been stuck in.  This morning it delivered as the SPDR S&P 500 (SPY) and Invesco Nasdaq 100 (QQQ) both gapped up on opening and are holding above their 20-day moving averages; their breadth nearly 9-1 positive on heavy volume.

This rally needs to be respected, and the Option360 Concierge Service has added some bullish positions I’ll get to later.  However, I’m sensing that FOMO is kicking in for professional money managers and retailer investors, who feel like the January low was a dip that should’ve been bought.  Now, the chase is on with financials and energy continuing to make new 52-week highs, but many of the beaten-down tech names — which had dropped over 50% — are finding a bid.  I’ll be curious what the readings of investor sentiment surveys, which have been running extremely bearish in the past three weeks, are this Friday.

An option gauge, which can often serve as a contrary indicator, is the CBOE S&P 500 Volatility Index (VIX), which gave a buy signal and is now suggesting an all-clear signal.  A Bloomberg article from Tuesday, titled “A Sure Fire Sign it’s Time to Buy Stocks”, cited a JP Morgan (JPM) report, stating “The buy signal is triggered when the Cboe Volatility Index (VIX) rises by more than 50% of its 1-month moving average, which it last did January. 25.” 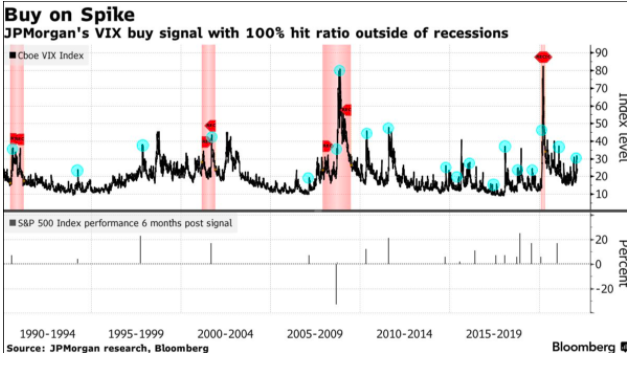 I’ll put my modesty aside and remind readers that on January 25, I sent a real-time Alert to Options360 members stating “We are now approaching the ‘whoosh’ that often accompanies panic selling and can often signal a short-term low.

We are certainly getting major oversold readings, today is the second 90/90 day (that is breadth is 9-1 negative and down volume  90%) the options put/call ratio has hit 1.30, the highest level since March 2020, and the VIX has popped some 26% to 36 and is clear backwardation. Other sentiment gauges such as the fear/greed index have hit are at extreme bearish”

Options360 proceeded to establish a bullish position in SPY which delivered an 82% gain over the next three days.

Admittedly, not all my trades have had such immaculate timing or were even directionally correct.  We took a Schwab (SCHW) bearish position loss, which was thankfully offset by a Capital One Financial (COF) bullish position.  However, this is the nature and challenge of trading in a volatile and choppy market in the wake of a sell-off that nearly touched the 20% bear market threshold.

One commonality in all of 2022’s  Options360 trades is a mere 1-5 day holding period; either I was wrong and closed the position, or we secured quick profits.  This short-term approach was a bi-product of the aforementioned choppy, whipsaw action over the past few weeks.  All told, Options360 is now up 7.1% for the year; a respectable return during a challenging market where the SPY’s still down 6.3% YTD.

So where do we go from here? Options360 has begun leaning more bullish and added some long positions over the past couple of days including Mosaic (MOS) and American Express (AXP) which might be closed for a profit as early as today.

One new trade I can share with you was a bullish play in Best Buy (BBY) that was initiated this morning.  The technical part of the bullish thesis was laid out in today’s Alert to Options360 members thusly; “ BBY has now built a pretty good base holding the $95 low and today it is breaking through resistance and 20-day moving average.”

The approach was to buy calls outright to try to leverage the current market momentum.  Sorry, I can’t reveal the specific strike or expiration as that wouldn’t be fair to Options360 members.

So take advantage of our Special Offer to become a member of Options360 and get in on the next trade!

​​[Last Chance] Claim your $19 Exclusive Offer into what our trading experts are calling “The Most Incredible Trial Subscription Ever…” — The Options360 Concierge Trading Service!