A few weeks ago — when the indices recovered roughly half of January’s losses — I pondered if we’d reached the low, or if we were in the storm’s eye waiting for the next selling gust. With the past few days of decline, we now have our answer.  The SPDR S&P 500 Trust (SPY) is back at the January 25th low. and in the 10% correction level.  The Invesco Nasdaq 100 (QQQ) has made a new low and in the 20% bear market territory.

In hindsight, the pattern played out to perfection; the 50% retracement took the SPY back to the $460 resistance level, which would’ve made a great short trade entry. More specifically, I felt the rally was a mere rip within a developing downtrend. The Options360 Concierge Trading Service lightened our exposure to just two bullish positions and initiated a Micron (MU) bearish position, which didn’t play out, as I was mostly left on the sidelines.

The initial rally was powerful and accompanied many markers with a sustainable low; from extremely bearish sentiment, to quickly improving breadth and decent earnings reports. But, the notion was to not be impatient and chase, this could just be the reflex rally associated with longer-term downtrends.  And indeed, there was a pullback and some choppy consolidation within the $440- $450 levels.

A week later, a second gap up to the 460 level seemingly confirmed the worst was over and the bull market could resume.  However, in both cases, those gaps proved to be a trap and left bearish islands (blue boxes) and we’re now projecting further downside.

Hence, we were getting a second bite to initiate bearish positions at attractive levels.

But, inertia is a powerful force and the years of successful “Buy the Dip,” which quickly transforms into Fear of Missing Out (FOMO), are hard to break.  I didn’t chase prices higher, but I also couldn’t muster the confidence to launch short positions. Basically, I fell back into my Happy I Missed It (HIMI) mode where if I felt uncomfortable buying something without justification just stay away.

I’m sure all the new retail traders, let’s call them the cult of Cathie or Hoodies, that piled into SPACs, IPOs, and new ‘disruptors’ sending their valuations to the moon, wish they had a little HIMI in them; now that those stocks have crashed. Here’s a sampling of the 52-week returns for some of the most popular stocks held by real accounts.  Ouch. 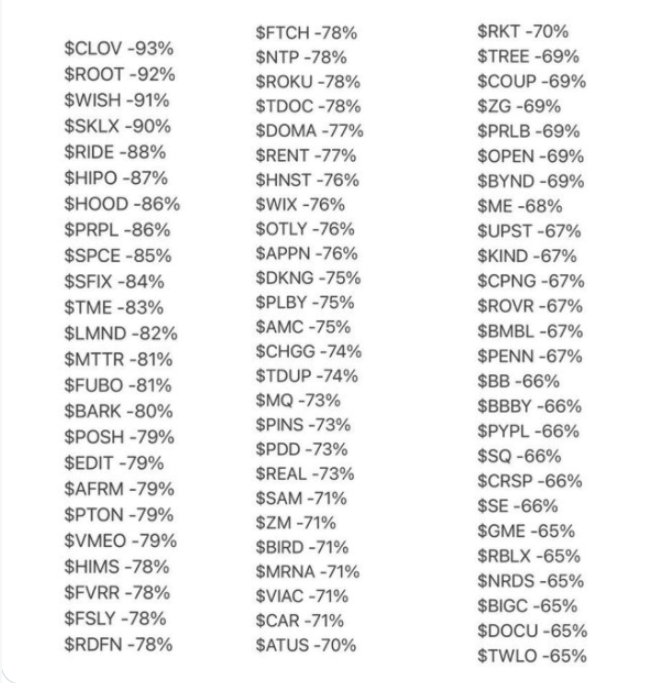 By no means am I here to gloat.  I’m actually concerned we may have just lost a fresh generation of investors just as occurred for a decade following the financial crisis.  It will take a good deal of perseverance to begin rolling that boulder up the hill again.  I hope this time they take the lesson that it can roll back down to heart and manage their risk lest they get flattened.

Preservation of capital is always rule number one for anyone who wants to have longevity in this business. There is always the nagging opportunity cost of not doing anything.  So, while a shift to the sidelines is prudent, it can’t turn into indefinite paralysis.  After all, the bills do need to be paid.

I’ll be back tomorrow from touring colleges with my daughter, rested, and ready to build those college tuition funds!