Home / Featured / Full Message / Why Today’s Rally Could Be a Temporary Reprieve From a Downtrend
Posted On February 15, 2022 4:12 pm
By: Steve Smith

Stocks are enjoying a relief rally today as the Russian invasion of Ukraine has seemingly been put on hold.  But, the major indices have now recouped about a half of what was lost on Friday when war seemed imminent.

Rather than figuring out how this geopolitical gamesmanship will impact the market, I’ll paraphrase to my colleague Christian Tharp, and other market technicians, who say, ‘don’t tell me the news, tell me the price.’  In other words, the why markets move narrative often gets retrofitted with 20/20 hindsight in hopes of providing a rational explanation.

I won’t completely dismiss news or events.  However, I do agree that price takes precedence. Meaning the same news might be greeted with different responses depending on the overriding price action and market sentiment. And it just so happens that news aligns with key price levels.

The upshot is that we’re back in the land of confusion that I discussed last week, where the Invesco Nasdaq 100 (QQQ) and SPDR S&P 500 (SPY) are in the middle of the recent range.

The headline risk coming from the Fed and Kiev made for a very choppy, often treacherous, trading environment with out-of-the-blue intraday moves. But, if one zooms out a bit, we can see the price, whatever the news, is adhering to the basic parameters that I laid out in the aforementioned article.

Let’s bring a couple of the charts from that article up to date. In the QQQ, you can see the crossing of the 20-day moving average below the 20-day moving average has proved to be significant as it reinforced the downtrend in place and became a point resistance which the QQQs have failed to clear. Though admittedly there have been two big up days that poked above the $387 level. But, these have proved to be false breakouts.  No one said this would be easy. 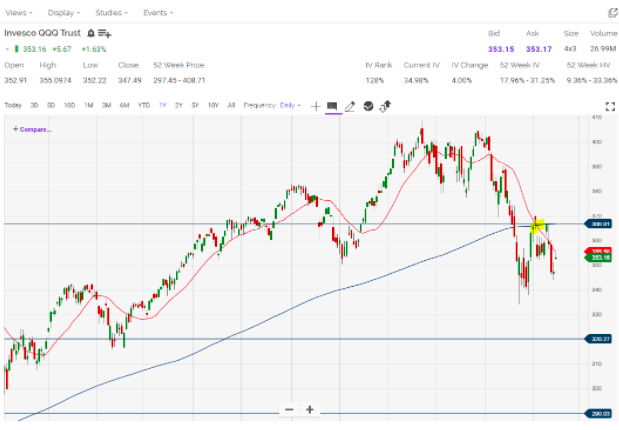 Turning toward the SPY, we’re just now seeing the 20 DMA approach a cross of the 200 DMA. And like the QQQ, we had two days where it appeared that it would break out with a resolution to the upside.

But on the first occasion Fed member Bullard spooked the market with talk of a 100 basis rate hike and on the second was news an invasion of Ukraine was imminent. Both are substantive items that rightfully move markets but it’s also curious how they coincide with key levels.  As I pointed out in this article last week, even though buy signals were being triggered, I was concerned the SPY “would run into a wall around the 460 level.”  And indeed it did. 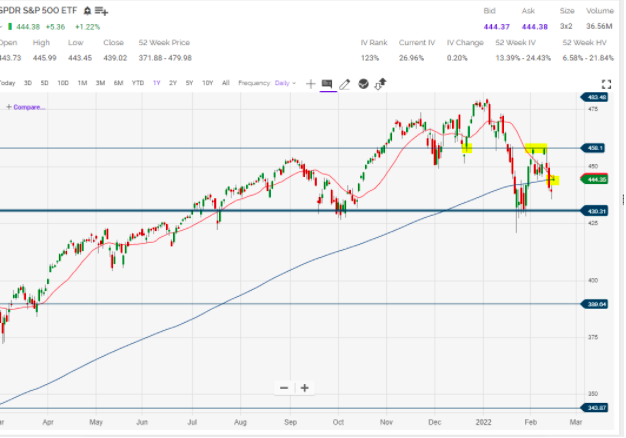 While I need to respect some constructive price action and the fact that the January low’s holding there, is mounting evidence that the recent bounce and current chop was only a reprieve from a developing and longer-term downtrend.

First, we’ve talked about how MAGA or Microsoft (MSFT) Apple (AAPL), Alphabet (GOOG), and  Amazon (AMZN) have propped up the headline indices hiding the beneath-the-surface destruction, saying we needed breadth to improve if there was to be a sustainable rebound.  Breadth has improved thanks to some sector rotation, most notably with energy and financials leading the way.

But, as we dig deeper, we see this type of rotation occurs late in the cycle and is often the last gasp before a bear market takes hold. 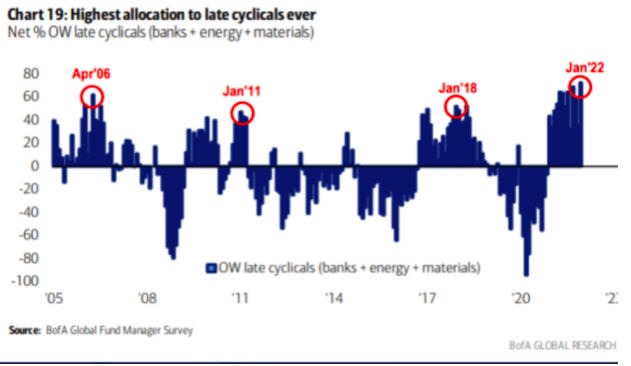 The second graph is a bit more suspect, but interesting nonetheless.  It shows how foreign investments often peaks prior to major declines. One can interpret this as a variation on the cliche that your Uber/taxi driver starts talking about the market, you know you’re near a top.  In this case, it might be a function of foreign investors seeking the safety of U.S. markets as things at home deteriorate. But, just as I suspected, MAGA might need to retreat back to the fallen soldiers, so does the U.S. eventually feel the weight of a snarled global economy. 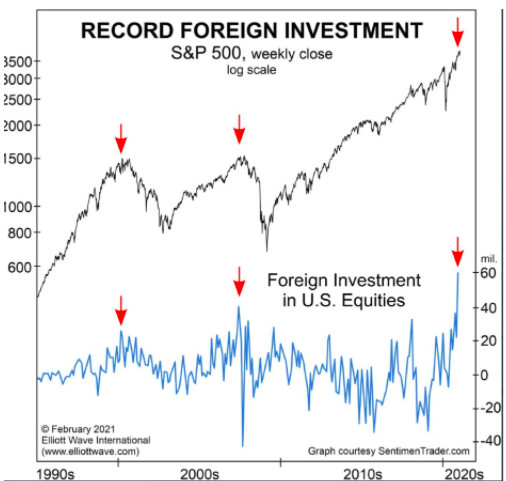 I’m not certain how this will play out in coming months, though I’m leaning towards a new low.  But for now, we’re back in the chop.

This means Options360 is keeping a tight leash and short time frame on most trades. Last week, I shared a bullish play in Best Buy (BBY) and the stock has held up well and the position is currently profitable.  Tomorrow, I’ll share a couple of new trades that Options360 initiated today.

[Last Chance] Claim your $19 Exclusive Offer into what our trading experts are calling “The Most Incredible Trial Subscription Ever…” — The Options360 Concierge Trading Service!