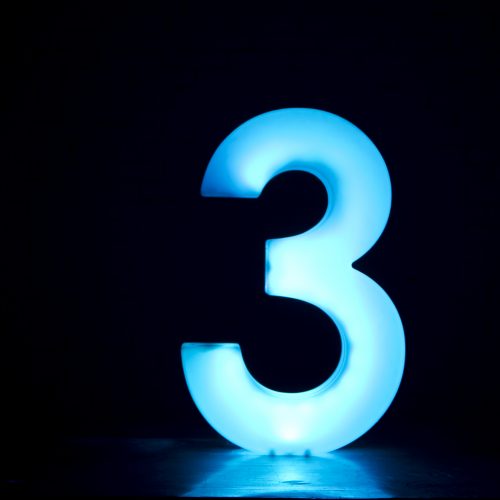 I’ll be ending work early today to visit my father for a few days. Even though he mentored and introduced me to trading and has forgotten more than I could ever know, our styles have taken a divergent path. I’ve coined him the “maniac.” Nonetheless, we don’t talk about trading or even the market too much. No, on this trip, he’ll get to see his grandchildren for the first time in 10-plus years.  Everyone is very excited!

[FREE VIDEO] Access the unconstrained options trading approach method that raked in 82% profits in 2021 for its members.

Additionally, I think we’re all also looking forward to a geography change. As much as I love the beach it will be a nice change of pace to see some lakes and hike some leafy trails.  For my kids, ages 14 and 16, who rarely leave the 5 boroughs of New York City, rural Tennessee is going to seem like another planet.

It will also be a much-needed recharge of my batteries.  Although most positions in the Options360 Concierge Trading Service are performing well and the portfolio’s up 6.8% in 2022, I’ve been beating myself up this week over a single position we had in Deere (DE), which thankfully died today due to options expiration. I consider it a mercy killing.

I’m going to briefly write about it in order to get it out of my system. But, this will also provide some useful education.

Admittedly, I should’ve cut and run last week rather than attempted to battle through adjustments.

The position was established on March 8 as a bear call spread in the 390/395 strikes with a March (3/18) expiration (indicated by the blue circle on the chart below) —  for a net credit of $1.15 for the spread.

My reasoning was that on the prior day, DE had tipped above old highs (resistance ) at $400, and then reversed sharply lower, leaving a bearish candle on the chart. 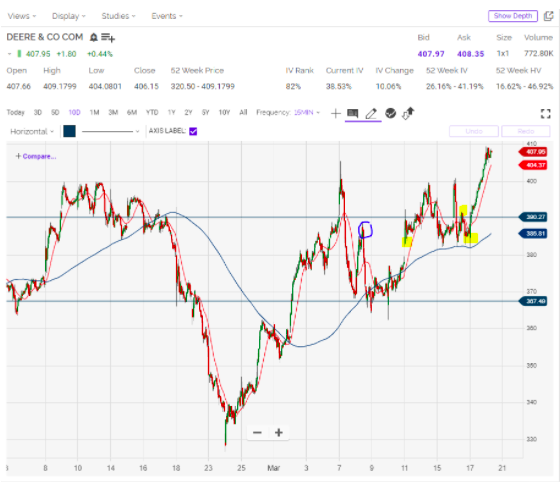 It looked like a great entry against the $390 level. However, my first mistake was selling a strike so close to the money and near my mental stop-loss level.  Also, the bid/ask was very wide and overall liquidity was poor.  By midday, I saw many strikes only traded 5-10 contracts and open interest was below 500 contracts in strikes.

Watch this FREE VIDEO to learn my trading process and approach!

I dismissed this as a risk, figuring the liquidity would return and bid/ask would tighten once the market settled down.  And we’d be out of the position anyway in a couple of days once the stock tanked.  After all, it had already dropped as low as $367 the next day.

I was wrong on both assumptions.  Over the next few days, DE shares moved over 10% intraday as headlines on Ukraine created some of the most volatile markets; and due to its exposure to agriculture, DE was seemingly more correlated to wheat than stocks.

Red Flag #1:  I initiated the trade based on chart price action. But, it became clear the headlines were taking precedence.

At some point in the next day or two, DE touched $400 before retreating back below $370 which made turning it into an iron condor look foolish; the put side of the position was being threatened.  Yeesh!

We held firm. But on the next rally, took DE back to the $400 level.  I decided to roll up the puts to higher 370/375 strikes to collect more premium. 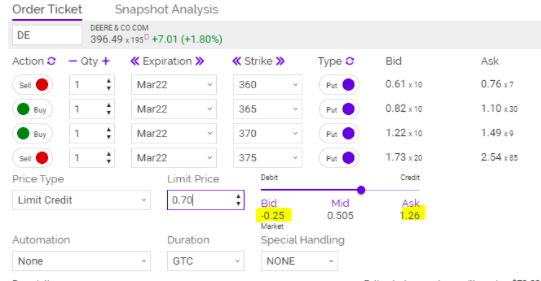 We eventually got filled and our iron condor collected a $2.80 total credit. Essentially, our breakeven points were $372,20 and $397.80;  seemingly a decent risk reward.  I figured time decay would soon kick in and we’d be able to exit prior to expiration for around $1.50 debit, which would’ve been a 35% return on the initial risk — assuming shares stayed between our strikes for the next few days.

Early this week, I entered orders to close for around $1.50.  On Thursday, I bumped it up to $1.75.  With only one day left, DE was trading between our strikes.  Here’s the order: 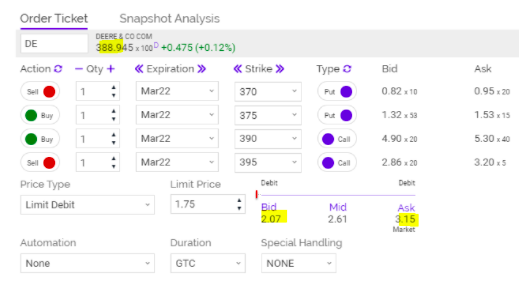 No dice. Nothing filled.  At this point, I should’ve issued an Alert directing members to close it, even if it meant going up to $3.00 for a small loss.  Thankfully, some members took it upon themselves and closed it earlier in the day for a profit.

Part of what I love about Options360 is the educational aspect. The service provides specific actionable trades while also “teaching” you to fish.

To wrap up today, THE shares zipped above $405 and we were forced to close the position on today’s expiration for a 65% loss.

I’ll end with what I wrote to members in this morning’s Alert:

“The bottom line I woulda, shoulda, coulda closed this on Wednesday for breakeven or slight profit. I don’t write this as 20/20 hindsight regarding the stock price movement. Rather it was my mistake staying in this position even after seeing after the illiquid and wide/bid-ask of the options was a problem. Instead of complaining, I should have taken action. Instead of hoping for a favorable price movement and being too stingy (and cute) with the limit prices used in our prior orders to close, I should have taken a prudent exit even if it wasn’t a price I deemed fair.”

Live and learn. And have a great weekend.