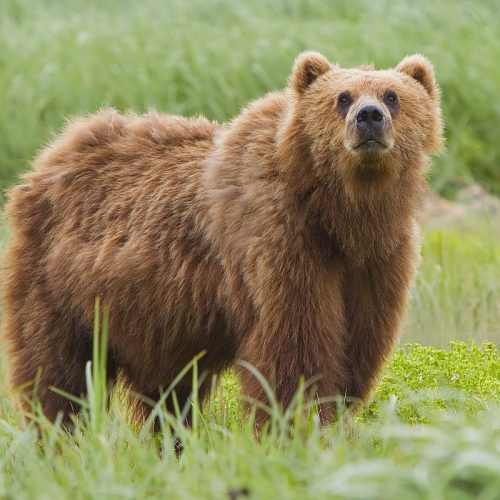 Even though over 50% of the 2000 stocks from the NYSE Composite Index are down over 30% from their 52-week highs, it took until yesterday for the major Indices to officially enter the bear market territory.  It only took the potential for nuclear war.

As overly stated, there was a bear market underway for the past six months. However,  due to the heavy weighting of the mega-caps such as Apple (AAPL) and Microsoft (MSFT) in the Nasdaq 100,  the Invesco QQQ Trust Series 1(QQQ) and SPDR Trust (SPY),  the indices have been masking the steep decline in the majority stocks. But, as the generals retreat to “catch down” to the soldiers, QQQ is down some 20% from its November high.

If we look at seven of the mega-cap stocks, which some clever person gave the acronym of FAATMAN (Facebook (FB), Amazon (AMZN), Alphabet (GOOGL), Tesla (TSLA), MSFT, AAPL, and Nvidia (NVDA), they’re below most of their moving averages; back to from nearly a year ago. 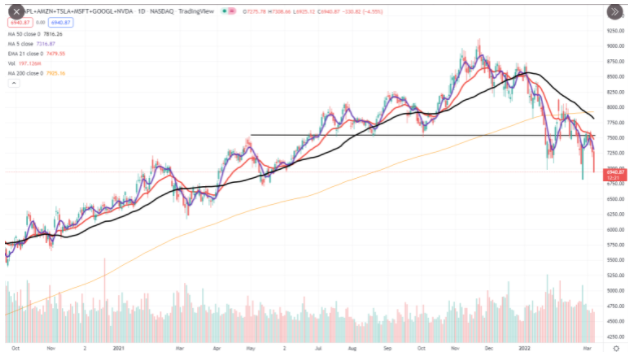 I’ve been saying that recent rallies were strictly the oversold bounces within a longer-term downtrend and Options360 had shifted to a more bearish bias. However, that hasn’t made this an easy market to trade. Our use of credit spreads to benefit from higher volatility has helped provide a cushion for entry points. But, the wild price swings have been treacherous, making it hard to have high conviction trades.  For this reason, the Options360 Concierge Service has reduced its position size and shortened the time frame.

Here are three things I’m looking for before the market can regain its footing.

Commodities Must Be Contained

I have some 30 years of trading experience, including 6 years on the Chicago Board of Trade floor in the corn, wheat, and soybean pits and on the Chicago Board of Options Exchange as an equity and index options market maker. I’m not alone in saying I’ve never seen crazier moves pushing systems to the breaking point. The commodity complex, especially grains and energy, have seen back-to-back limit up and down movements  This morning, the London Metals Exchange took the unprecedented move to suspend trading in nickel futures and cancel transactions after the metal surged over 100% during yesterday’s session. It was a move needed to prevent the bankruptcy of the largest metals fund, which would have led to cross-market contagion.

Obviously, a peaceful resolution in Ukraine is crucial for alleviating what has become panic in many essential commodities. Unfortunately, I think the use of sanctions is forcing Russia to dig in deeper. The seizure of assets and the shuttering of operations are creating financial weaponization leading to price spirals as each side seeks leverage.

There is a saying, stocks take the escalator up and the elevator down. In commodities the opposite is true.  Meaning while stocks usually form a “V” bottom, commodities tend to have a ‘V’ top.  I’m waiting to see commodity prices have a blow-off and reversal before the potential for runaway inflation leads to a recession.

While there has been a lot of pain delivered over the past few months, I don’t get the sense or see the signs of the full capitulation needed to create a true “V” bottom in stocks.

As mentioned, the pain of the bear market of the 2008 financial crisis left many investors on the sidelines for a decade-plus.  The market truly did climb a worry wall in what became known as the most hated bull market ever.

In the past few years, the distrust of the stock market morphed into FOMO as a new generation of investors came to believe that stocks only go up with a buy the dip mentality. This habit of BTD will also take a lot of heartache and time to break.

One sign BTD is still in play is that the ARKK Innovation Fund (ARKK) — the poster child for speculation and overvaluation — has had four straight weeks of inflows for a total of $850m, This made it the 22nd biggest flow-getter of the past month, and despite its price going down 17% in the past month and off some 65% from its peak.

Also, my Twitter feed still has more posts with Wordle scores than how much stocks are down.  If the markets climb a wall of worry they also fall on a slope of hope.  We need to see people throw in the towel before the bear market can find a bottom.

The Fed Sticking With Plans to Normalize Rates

The main reason for the incredible bull market and fearless BTD attitude has been the extraordinarily accommodative action of the Federal Reserve.  From zero interest rates to asset purchases, there was faith that the “Fed put” was in place and they’d always come to the rescue of falling stock prices.

Powell has now, finally, laid out a plan to raise rates and quantitative easing.  The first test will come next week when the first of what is expected to be five to six 25 basis point rate hikes to occur.

The market has been ready and waiting for monetary policy normalization. If Powell fails to follow through with his planned hikes, I think it will further unnerve the market as inflation fears leading to a recession creates a steeper bear market.

Headline risk has never been higher with many countervailing forces. The above are just three items to keep your eye on. Proceed with caution.