One of the most popular volatility-based products saw trading halted multiple times today due to (wait for it)… excessive volatility.  Extra ironically, it’s been one of the least volatile of the past two weeks.

[Special Offer] Claim your $19 spot into the Options360 Concierge Trading Service — before it’s too late!

The halts in the Barclays’ iPath S&P 500 Short-Term Volatility (VXX) were implemented, per exchange rules, VXX  jumped 20%;  automatically triggering a 10-minute halt, it then rose another 20%, triggering the second halt. When VXX reopened, it climbed to $41(up some 52%) on the day. It then dropped 20%, triggering a third halt.

All this action was happening while the CBOE Volatility Index (VIX) was mostly unchanged on the day.

The chart below compared the VXX (candles) to the VIX (blue line).  As you can see, the VXX  surge wasn’t spurred by a similar increase in the VIX.  A similar and competing product, the ProShares VIX Short-Term Futures (VIXY), was also unchanged to fractionally lower on the day. 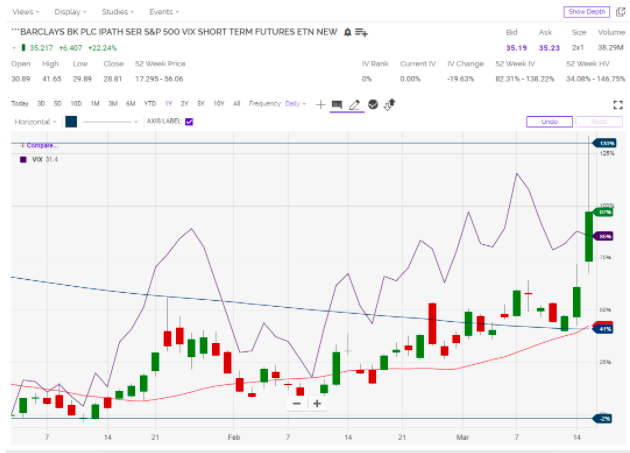 So what’s exactly causing the dislocation?

The strange action started yesterday when Barclays, the VXX sponsor, issued a press release saying they were suspending the issuance and sale of new shares in VXX and iPath Pure Beta Crude (OIL), an ETN that tracks crude oil prices.

Claim your $19 trial into the Concierge Trading Service That’s Delivered Its Members 82% Gains in 2021 — and have brought them returns every single year since inception — The Options360!

A couple of odd items; Barclays announcement was made about 15 minutes prior to the market opening. However, the funky action didn’t start until about 2 hours later when it was picked up by newswires such as Reuters. It’s hard to believe that multi-billion dollar hedge funds, which employ sophisticated volatility strategies, didn’t pick up on the news right away.

Another odd occurrence: Barclays didn’t really explain why they were taking the action, or when it may resume issuance sales, merely stating it “ does not currently have sufficient issuance capacity to support further sales from inventory and any further issuances of the ETNs. These actions are not the result of the crisis in Ukraine or any issue with the market dynamics in the underlying index components. Barclays expects to reopen sales and issuances of the ETNs as soon as it can accommodate additional capacity for future issuances.”

Most people think Barclays took the action to reduce risk as trading volume and opens have surged in the past month; volume is averaging 70 million a day;  twice the daily average from the prior year and assets under management crossed the $1 billion level.

The suspension, which reduces supply, gave people flashbacks to the Volmageddon of 2018 when Credit Suisse did the same in two of its VIX-related products, TVIX and XIV, causing those products to double in two days before imploding and putting those funds out of business. I write about it here and here.

I’ve also explained the VXX’s structural nuances,  which among other things, send the price toward zero over time.  This is a reason that I no longer trade the VXX, but rather use the options based on VIX futures. Full disclosure: Options360 currently has a bearish butterfly spread position in the VIX April puts.

The VXX is among the most popular volatility vehicles as well as heavily shorted with about 85% of its shares sold short as funds and professional vol traders use the above-mentioned structural ‘flaw’ as a tailwind to short VXX while hedging in other products like VIXY, or UVXY.  This makes the VXX a prime candidate for a potential short squeeze.

The underlying cause of the issuance capacity issue may be a number of factors, including the cost of hedging the position, exchange position limits, or other factors.  Without knowing the underlying cause, it’s difficult to predict when new creation units will be restored.  That said, if VXX appreciates in price, the size of the problem Barclays needs to tackle will continue to rise, further complicating the resolution process. Right now, Barclays is very lucky they announced the suspension during a relatively calm day of trading.

The bottom line is: if you want to trade these VIX-related ETFs make sure you understand their structure, the contract specifications, and the rules governing issuance. This appears to be a case of preemptive action where the casino owner took the dice away before a player could get too hot.