Home / Featured / Full Message / REVEALED: Why You Still Should Not Fight the Fed 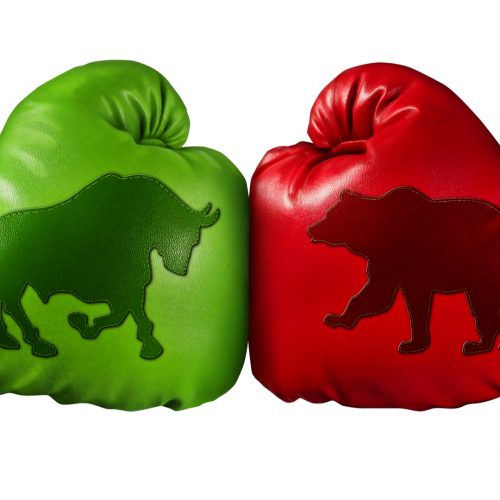 As the old saying goes, “Don’t fight the Fed.” However, the question now is whether the Fed can fight inflation? For most of the past 12 years, that meant holding a positive and bullish outlook on stocks as the Federal Reserve engaged in extraordinary measures to provide accommodative monetary policy.

Well, that saying cuts both ways and now we have a Fed that signals it will take an increasingly aggressive stance to battle inflation. This means being cautious, if not outright bearish, on stocks

The Options360 Concierge Trading Service is doing its part by offering a one-month “Inflation Buster” trial offer for just $9! CLICK HERE to take advantage of it!

In the past few months, I’ve been stressing that the most vicious rallies come during bear markets, which we’re indeed in. It will make new lows in the coming months.  Of course, when you get caught up in the day-day-day action, you can easily miss the big picture.  The Options360 Concierge Trading Service performed well, initiating an SPDR S&P 500 (SPY) bearish position when it crossed above the 460 level implementing the “triple play” strategy. I closed it today for a 92% gain.  But, that doesn’t mean we totally avoided taking any recent hits. A few bullish positions that we established during March’s second-half big rally where the SPY gained some 11% over 12 trading days and Nasdaq 100 (QQQ) roared up some 15% during that period. After some aggressive defensive adjustments, Options360 continues holding positions in Plug Power (PLUG) and The Trade Desk (TTD). However, new positions are more likely to have a bearish bias.

That said, we must be patient as we don’t want to sell in the hole only to get another face-ripper of a rally.  As I type this, we’re awaiting the minutes from last month’s Fed meeting where they attempted to fight inflation with a mere 25-basis point hike. Since then, they’ve seemingly realized that they’ll need to be more aggressive. One of the triggers for the fierce selling — in the past two days — stems from Fed governors, particularly ones that were known to be more dovish, suddenly talking about wanting “a more rapid runaway of the balance sheet.” In other words, draining liquidity from the market, or what’s referred to as quantitative tightening (QT).

I think Powell thought he could bide time by jawboning with tough talk and moving slowly, hoping the market did his bidding by selling off and inflation self-corrected. That clearly isn’t happening.  When the entire Fed is saying the same thing, it’s not all talk; a 50-basis point hike and QT over $20 billion a month, at the May meeting, is a lock.

There are two main problems; neither action can fix the supply side constraints part of the inflation equation nor the persistence of labor shortage across key manufacturing industries.

What rising rates can do is crush assets such as stock and home prices. I think the bond, and to some extent, the housing markets, have already come to terms and priced in the Fed’s aggressive policy.  We’ve just seen mortgage rates have the largest quarterly jump since the early 1980s and with 30-year fixed rates now above 5%, the highest level in 7 years.

The impact can already be seen in mortgage applications, which fell over 40% during March from a year ago. 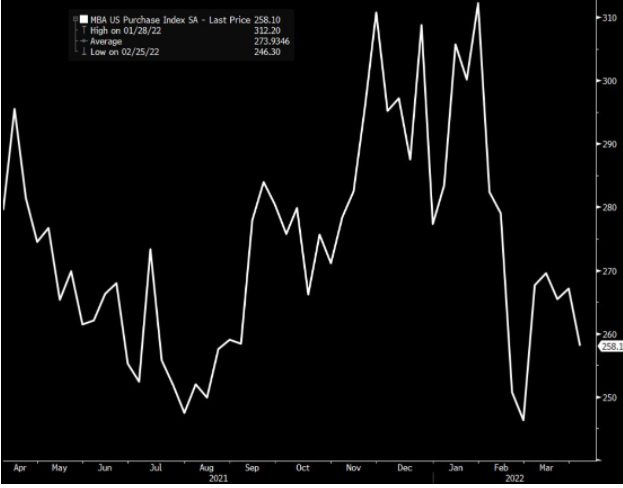 The problem is that stocks may haven’t come to terms with the Fed’s willingness to crush asset prices to fight inflation from the “wealth effect” standpoint.

To this end, the notion of aggressive QT is serving as a wake-up call.  It should come as no surprise the March rally came even as the Fed was engaged in a bond purchase, including mortgage-backed securities which added liquidity to the system. What must be emphasized is how the draining of liquidity impacts prime brokers, the arm of banks, which provide overnight lending to big institutions and hedge funds. That free-and-abundant money will be dissipating, diminishing the FOMO and TINA activities that have been driving this bull market.

This week’s sell-off may reflect short-term fears, regarding how the shift in Fed policy might be risking a recession to fight inflation, so be prepared for another snap-back rally in the next week or two.  But, make no mistake, the Fed’s attempt to fight inflation means it’s no longer propping up the market. And you don’t want to fight the Fed!