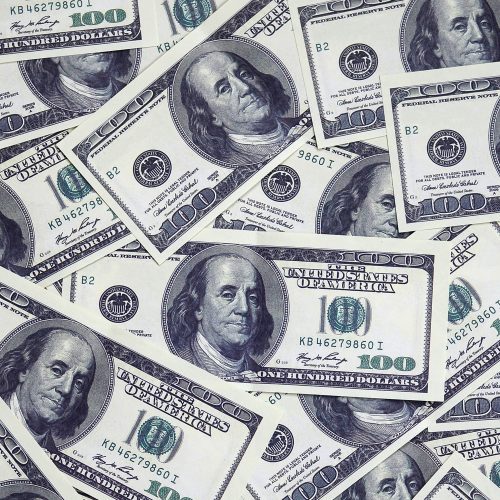 What a wild week. Although I have a few more positions to square away today, I’m glad to say that my Options360 Concierge Trading Service squeaked out some gains this week. It still stands up at 5.8% for the YTD.  I know that’s not exactly knocking it out of the park. But, when the market is off to its worst start in 40-plus years and stocks are striking out left and right, racking up the small wins and staying in scoring position ultimately wins games.

As Mike Tyson famously stated, “Everyone has a plan until they get punched in the mouth.”  Well, unlike a lot of knockout victims, the Options360 has avoided getting punched in the mouth through risk management and capitalizing on available profits.

As I’ve said before, this is a stick-and-jab market.  The goal is to stay on your feet with enough stamina to take better swings when good setups present themselves.  Okay, I know I kind of mixed up my baseball and boxing metaphors.  However, I’m not the only one having bad communication skills this week.

Yes, I’m talking about Federal Reserve Chairman Jerome Powell who once again failed to convey a message that the market needed to hear.  His core miscue was in what he said:

“Inflation is much too high, but we have the resolve it takes to bring it down and the American economy is well-positioned to handle tighter monetary policy…BUT.. the committee is not actively considering 75 bps hikes.”

Eh, what? I don’t understand, you’re resolved to fight inflation, but you’re taking your main tool of raising rates aggressively off the table?  Making matters worse, the Fed also shrunk the balance sheet by just $40 billion a month; less than half the expected $90 billion a month.  This begins in June.

They also reduced the number of expected hikes from 5 to 3 in 2022.

Basically, when Powell should’ve been saying, “all options are on the table and we are moving aggressively NOW!” he hemmed and hawed. To sum it up: Instead of revealing hawks’ claws, Powell grew doves’ wings.

Again there was absolutely nothing weak he could see about the US economy. Remember, he also didn’t see any inflation or thought it was transitory.

What’s even more relevant is that Powell got all the moves he wasn’t looking for.

But, we’ve seen this before. Post the March FOMC conference (dark blue) Powell also got the exact opposite of what he wanted: an equity and credit spread rally loosening FCI. 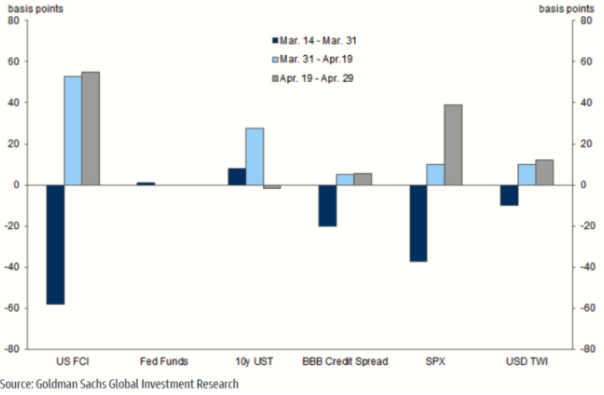 A few weeks later, Fed speakers boosted their hawkish rhetoric to stop the risk asset rally in April (light blue and gray bars). And sure enough, there are five Fed Governors slated to speak today, with Kashakri already chiming in this morning, stating: “We will likely have to push long-term real rates to a contractionary stance to bring supply and demand into balance.”  This means, that even sending the economy into a recession is on the table.

And that’s the reason why — after initially soaring some 3.5% on Wednesday following the meeting — stocks have sunk over 5% (and counting) since.

Anywho, let me make one thing perfectly clear. “I love you, Mom.”

Have a great weekend and Happy Mother’s Day to all the great moms out there!