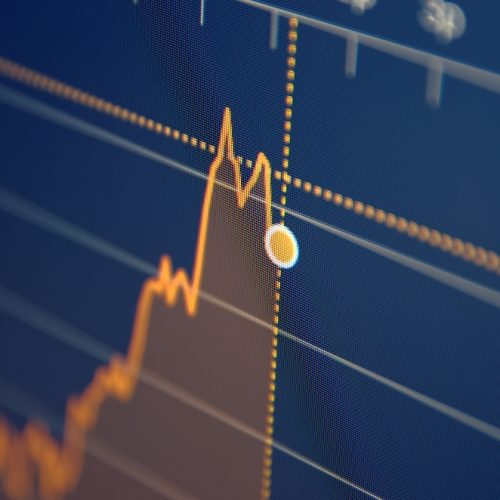 Pigs get fat; hogs get slaughtered.

The idea is this: In trading, you don’t want to be so risk averse that you never make a decent profit. You want to be a little bit of a pig. But you also need to know when to lock in a win. If you get too greedy (or “hoggy”), your solid win can quickly turn into a loss.

It’s one of those old “pearls” that many new traders never learn. But it can make the difference between success and failure.

In fact, it’s the exact mentality that has led to Options360 being up 16.8% in the face of this bear market.

Today, I want to share a trade we closed just last Friday that really illustrates what a difference this mentality can make on your portfolio.

It all started on Monday, when I recommended a bear call spread on QQQ, which tracks the Nasdaq 100 index. I believed stocks were due for a drop later in the week as new data showed inflation was still sticky.

A bear call spread is typically used when a trader believes a stock will drift lower or, at minimum, remain stable. This type of spread is usually set up by purchasing a call option and then selling the same number of call options on the same underlying security with the same expiration date but a lower strike price.

However, because of the absolute ripper of a rally we had seen in June, I wanted to give our trade extra protection against an unforeseen melt-up. Here’s exactly what I recommended:

I want you to notice the purchase of the “extra” contract as this turned out to be not only a major mitigation of risk but turned into a means of generating additional profit.

On the risk mitigation front, it vastly reduced the potential loss and also meant QQQ could soar up and through the $324 strike and turn a small loss into a massive potential gain. Here is the initial risk/reward profile. Is that not a thing of beauty or what? 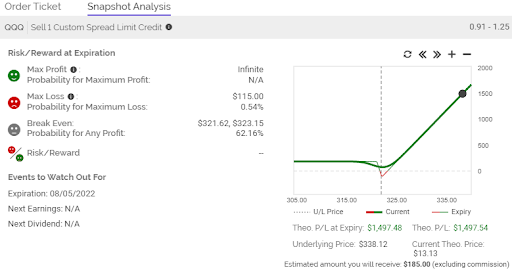 Sure enough, on Thursday, QQQ powered up above $323, putting the position in the most vulnerable place, where we could actually incur a loss.

But this is where that whole “pigs and hogs” bit comes into play. Remember, I wasn’t positioning for the crazy upside, just protecting in case it happened.

My trade thesis was still that the $322-$325 area represented resistance and a strong jobs report on Friday would keep the Fed on a path of aggressive rate hikes, which would take the steam out of the rally.

So, on Thursday, I called another audible and decided to use our “extra” long call contract to collect some additional premium and reduce risk.

Here’s what we did: 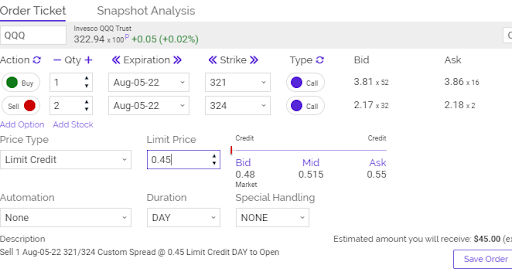 This means we collected an additional $50 for a total of $235. This represents the maximum gain while reducing the risk to $2.95; for a credit spread this is an attractive risk/reward, as time decay is greatly in our favor heading into expiration.

That brings us to the exciting finale of our trade. On Friday, the blowout jobs report led to a sharp drop in the indices, and QQQ initially dropped over 1.1% to below $319 per share.

At that point, with a win in the hand, I decided to close our trade.

QQQ’s opened sharply lower, but are now holding above $320 level.

We entered two limit orders to get the call spreads closed.

Both orders were executed, giving Options360 a solid 26% profit during the five-day holding period.

Here we have another pigs/hogs moment.

As you can see, we were good “pigs” and took our solid win. Once the risk/reward becomes asymmetrical, it is prudent to lock in the gain.

But a less-experienced trader would have likely done the “hoggy” thing and tried to ride the credit spread to zero for a bigger potential win… It certainly looked like that was a possible outcome.

Of course, what happens to hogs? That’s right; straight to the slaughter house.

After our trade closed, QQQ climbed back above $322-$323. If we had held out for the “hog” win, we would have turned our solid gain into a LOSS.

But that’s the benefit of having been around the block my fair share of times. In the end, rather than sweating out the last couple of trading hours, I was able to book the profit, check out, and chill out on a chair at the beach.

And what’s a better outcome than that?