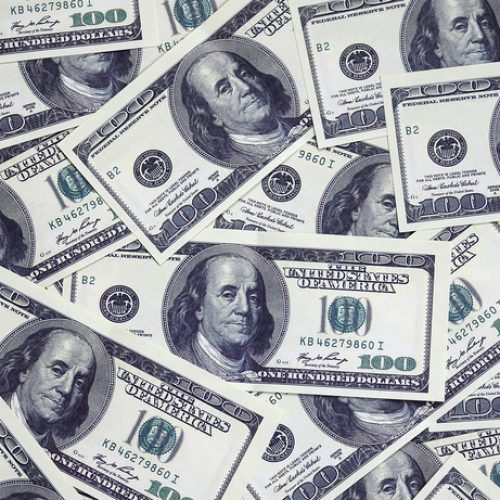 Over the past two weeks, the major market indices staged powerful rallies.

With the market’s recent strong run, which sliced the year-to-date losses in half, and SPY hitting the first line of resistance, my premium Options360 trading service issued an alert for members to initiate a bear call spread in QQQ. It’s a very short-term trade that will expire on Friday and so far is benefitting from a decline in QQQ and some acceleration in time decay.

If QQQ remains below $320 (as I expect it will) through Friday’s expiration, we could be looking at a potential 45% return on risk.

Over the next few weeks, I think the market could rally another 4% to 5% before it hits another wall of resistance.

The market’s recent rally has been impressive on several fronts. For one, it’s taking place even as inflation data remains hot and the Fed maintains a hawkish tone, which is normally hard for the market to overcome. And while earnings have not been worse than expected, the numbers have been very “meh.” There is also a continued deterioration of macro conditions, especially as the extreme heat and food shortage leads to crisis levels with winter just around the corner.

From a technical standpoint, several key resistance levels on solid internals with several breadth thrusts noted. These are typically powerful indicators of a turning point, as improving breadth and “up” volume indicates large market participants such institutions such as pension and hedge funds are aggressively buying and accumulating stocks. And while we never did get any 90/90 day (that is 9-1 positive breadth and 90% up volume), just a few 85/85. Good but not definitive.

But then again most labels have a relatively arbitrary line in the sand. Such as the debate over what qualifies as a ‘recession.’ The United States printed two consecutive quarters of negative GPD, which some people consider a recession, but — and there is always a ‘but’ — this time it really is different, in that U.S. labor market remains robust, consumer spending is strong, albeit with credit card debt hitting pre-pandemic highs.

So, the definition of a recession is squishy and mostly meaningless as it doesn’t account for a myriad of other factors and inputs. Just as people were waiting for the SPY to drop 20% from the high in April before declaring a bear market, most market watchers felt the bear market began in late 2021.

Right now, and until we see massive layoffs, we are nowhere near a recession. That doesn’t mean the stock market isn’t vulnerable; valuations have not compressed enough, the Fed may indeed maintain aggressive hiking and one important item being lost in the shuffle is the Quantitative Tightening (QT) or draining of liquidity is starting to accelerate and causing some impact.

You can see the failure to deliver Treasuries (which are used as the overnight repo process) is trending higher and had two recent spikes near the 2020 pandemic high. 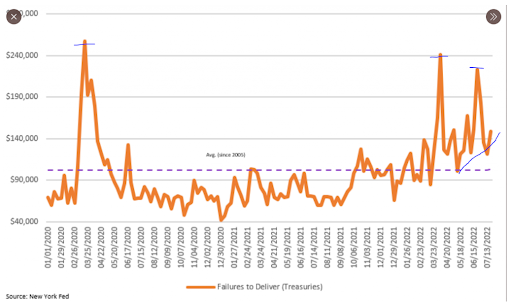 Some technical indicators are turning bullish. But it all seems very precarious. I know it’s cliche, but Options360 is being patient, waiting for good setups, and trying to utilize the strategy that will provide the best potential for profitability.

Get Your One-Month Trial to Options360 for Just $19