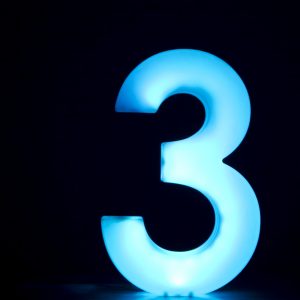 Despite 2021 stocks posting some of their lowest volume days, there was still a plethora of action and shifting narratives that made it a very interesting, and informative week.  Here are three top-of-mind things in the market that make me go hmmm…

During most of July, I was issuing a cautious tone and the Options360 established a couple of bearish positions, with Invesco Nasdaq Power Shares (QQQ) being most notable.  My biggest issue was the divergence in reading, such as the deterioration of breadth as the advance/decline line slumped even as indices hit new highs carried by big cap tech weighting.

After locking in a 41% return in QQQ’s, I took a wait-and-see attitude. Full disclosure: I still hold a partial position in the QQQs which I continue to roll into Monday/Wednesday expirations to collect the premium. The position expires next Friday and then we’ll see what will be.

However, this week I moved off the sidelines, encouraged by improving breadth — noted by the comparison of the Nasdaq Index composite or QQQs, the blue line,  which is market cap-weighted, to the Nasdaq Equal Weighted Index (QQQE).   You can see the extreme separation that occurred in late July marked a momentary high in the QQQs. 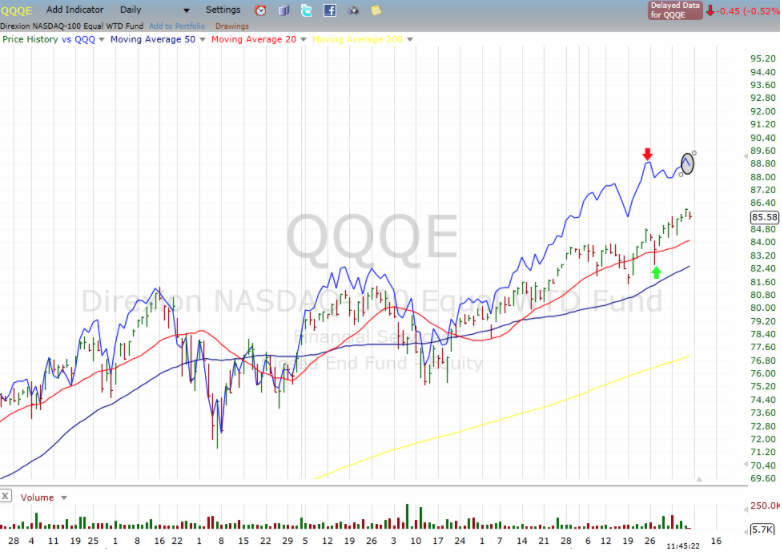 I’d still like to see this gap narrow more. But, the past two days — indicated by the circle — show a reversion or continued improvement in breadth.

And the improving breadth is not limited to the QQQs.  Within the S&P 500 (SPY), we also see more sectors moving in unison rather than the extreme, almost daily rotation from growth to value, or opening to reopening.  Case in point, S&P Financials (XLF) mostly shrugged off the sharp rate drops early in the week, popping today as rates jumped on strong jobs data. 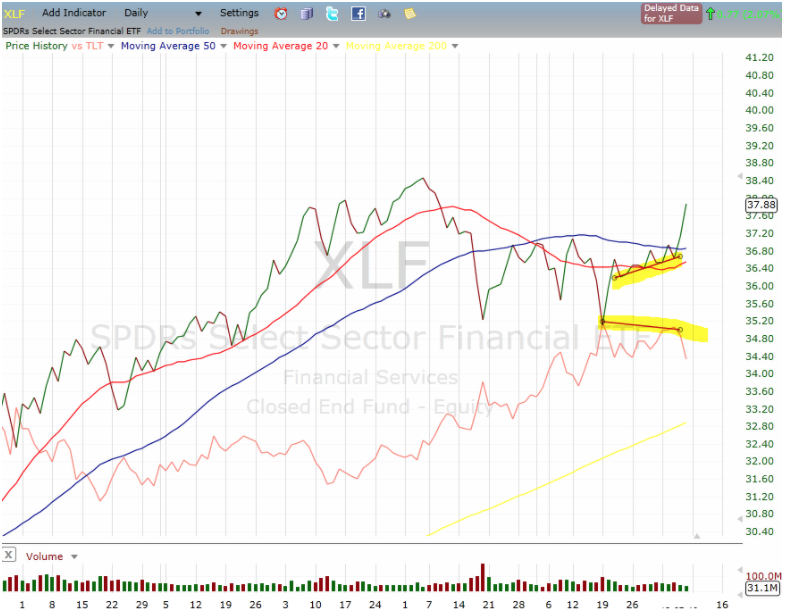 I never thought people, okay Twitter (TWTR), would become so delta-fluent.  However, I was still thinking in terms of options. Now, I realize it’s a new variant of the Covid virus.

And while politicians across various affiliations and geography are taking a wide range of approaches, the market seems to be shrugging it off.  This is evident by this week’s rally in the Dow Jones Industrial Average and the S&P 500, which both hit all-time highs.

This is why, last week I bought some reopening plays, such as Southwest Airlines (LUV) and Las Vegas Sands (LVS).  I didn’t catch the bottom, but both are now moving back to even with the trend turning higher.  I gave these positions a longer leash time-wise using September expirations.

3. Gamma in the HOOD

How can I not address Robinhood’s (HOOD) initial public offering (IPO)? It took place last week. It not only didn’t get a first-day pop but also languished below the $38 IPO price for the next few days.

Then, on Wednesday, the stock went bonkers when options were listed.  At one point, rising by over an $85 high, or 125% from the issuance price. Sure, some of this might have been retail deciding to get in, but remember Robinhood account holders had a chance to grab up to 35% of the IPO at the $38 price with only 23% taking the offer.

With this move and the ensuing volatility,  HOOD has now retreated some 30% from the high and was powered by professionals. Hedge funds have learned from the WSB apes about gamma squeeze execution.

Climb on Board the Options360 Concierge Trading Service for the extremely low rate of $19! 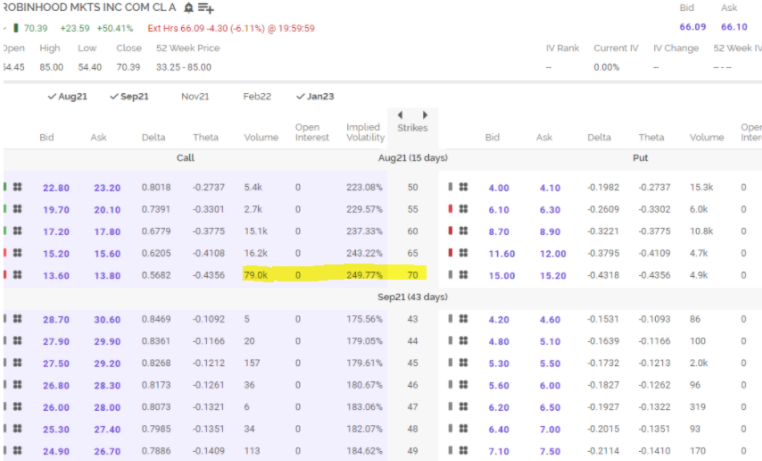 This is where I get on my high horse; the exchanges know-how gamma squeeze dynamics can cause the tail of options to wag the stock dog.  But, they keep listing more strikes.  Today call strikes go up $90, perpetuating the situation.

Part of me thinks I should, “Give the people what they want” with more profits for us on transaction fees.  However, the other part of me thinks that tamping down the time and range of new strike prices would go a long way to preventing the meme mania. Additionally, I think it’s a better alternative to the multiple intraday trading halts, which is akin to sweeping all the chips off the table mid-roll, employed to reign in runaway stocks.

I don’t play those games and I’m all for a “buyer beware” attitude.  However, in my opinion, casinos/exchanges should rethink what games they’re enticing people to play.