Today’s midday bounce seems like a ‘bull trap’ as we head into the much-hyped ‘Santa Claus Rally ” which I delved into and suggested initiating bullish butterflies.

In the past few days, I’ve made a few adjustments, including rolling down the butter strikes, adding a put diagonal and locking in a profit on The VIX strategy.

Basically, Options360 is in good stead. Heading into the last 10 days of 2021, the Options360 Concierge Trading Service is up 70% with potential for gains rather than risk on the table.

The best part is that we’re in a no-stress position.

So, when I read headlines like this one from Bloomberg, I chuckle; indicating that people are running around like chickens, and changing their opinions and direction, which makes me laugh.

“The failure to bounce is rattling those conditioned to anticipate it and comes as a litany of stressors weighs on bulls. Last week, when the S&P 500 fell on all but one day, investors poured $30 billion into exchange-traded funds focusing on U.S. equities, the largest inflow since March, according to data compiled by Bloomberg.

To their chagrin, stocks started the new week on another sour note, with Senator Joe Manchin’s rejection of President Joe Biden’s tax-and-spending package adding to a long list of market worries from a hawkish Federal Reserve to the fast-spreading omicron variant.”

Stocks got too high. This summer, Powell missed his window to quit QE and make plans for rate hikes.  But instead, stuck to his mantra of “inflation is transitory”.  He may extricate himself from this rock in a hard place and maybe the perpetuation of a buy-the-dip will do his dirty work.

We’ve spoken numerous times about the dispersion between headline indices, still just 5% off all-time highs versus the mass destruction of MEME favorites, now down 50%-80% year-to-date.

Indeed, large-cap stock dip buyers refused to give up last week. The SPDR S&P 500 ETF Trust ( SPY) attracted money for a fourth straight week, the longest inflows streak since September of 2020. The Invesco QQQ Trust (QQQ), the largest ETF tracking the Nasdaq 100, added about $5.5 billion of fresh money last week, the most in 15 months. 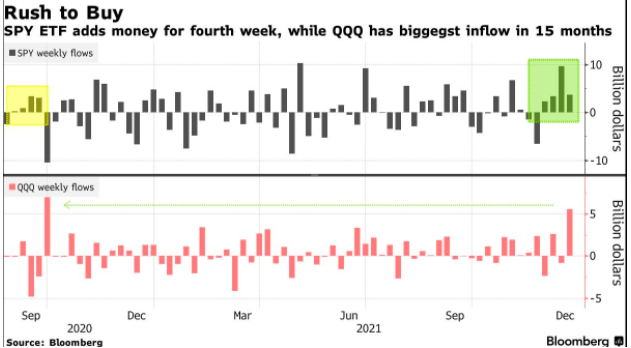 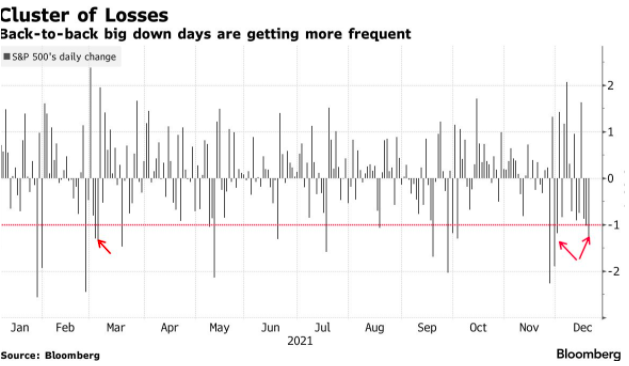 The Options360 Concierge Trading Service is still expecting a run higher into the end of the year.  But, I’m reducing exposure and locking in gains with each swing into my wheelhouse.

My Option360 position will get paired down over the next 10 days, and if I don’t fall short, we should close out the year up some 70%.  I can live with that.

[LAST CHANCE – $19 SALE] Ring in 2022 with the service that’s delivered profits to its members EVERY SINGLE YEAR since starting — the Options360 Concierge Trading Service.