Home / Featured / Full Message / Is the Market Headed Even Lower? 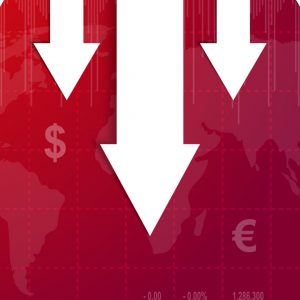 Stocks are trying to stabilize today, but are still on track to have a seventh consecutive losing week.  This is something we haven’t seen since the notorious bear markets in 2001 and 2008. It also makes it hard to be too aggressive in initiating new bearish positions.  My hope of shorting Apple (AAPL) I mentioned the other day was dashed as the stock failed to get above my $150 target for establishing a bearish position.  Additionally, it’s already down to my $140 target. The discipline of waiting for the high-profit probability setup is crucial for long-term success.

I’m spending a few days with my father in Tennessee.  It’s a nice change of scenery and temperature as Florida is starting to cook in the summer sun. Currently, my Options360 Concierge Trading Service has no open positions, and I’m perfectly fine with that. It gives me a chance to look at the forest instead of the trees.

The SPDR S&P 500 (SPY) hit $385 last week, which has become a lot of people’s, fundamental and technical, initial downside target. It also marks a 20% decline, the new measure for labeling it a bear market.  It got a nice bounce the following three days. However, I’m close to retesting it today. While the market might be due for an intermediate-term rally, I think it will stall near the $318 level; about 6.5% higher from here.

There are some red flags indicating we’ll still be in a downtrend for the next few months.

First, some terrible earnings reports suggested that the fundamentals of the economy are deteriorating. Topping the list were big misses by Walmart (WMT) and Target (TGT) which caused their stocks to plummet over 25%; their historically largest one-day losses. Full disclosure: Earnings360 took a WMT bullish position ahead of the report, resulting in a $180 max loss.  A great advantage of options is the ability to define and limit losses.

Both companies cited a sharp consumer spending shift, and now have bloated inventories needing to be marked down, something not seen in a while. This will hurt margins. Seemingly more worrisome is both being overstaffed. Amazon (AMZN) said the same thing in its disastrous earnings report two weeks ago.

While layoffs may ease some of the labor shortages, a few industries are still experiencing, growing unemployment wouldn’t be healthy for the overall economy. These workers are also customers. The employment picture is also turning negative, in some pockets of white-collar workers, especially in technology firms.  And it’s not just the cash-burning start-ups that can no longer rely on the kindness of venture capitalists. Even Facebook (FB) is cutting its programmer and engineer headcount. These high-wage earners were a big part of powering stocks higher in the prior two years.

This leads me to today’s Cisco (CSCO) earnings report, which came up short and had a lowered outlook, causing the stock to drop 15%-plus today.  This suggests corporate spending on enterprise is cooling.  Again, all those well-funded start-ups were buying a lot of equipment. The rush to digitization during the pandemic probably pulled forward demand by several years.

What’s worrisome is that analysts have not lowered 2023 estimates and still anticipate 12% annual earnings growth.  Right now, the SPY may look relatively cheap at 16x forward earnings.  However, as those estimates decrease, the valuations will no longer look attractive.  In other words, stocks could continue to slide.  The market is forward-looking. But, I don’t think it’s seeing what could be a tough road ahead.