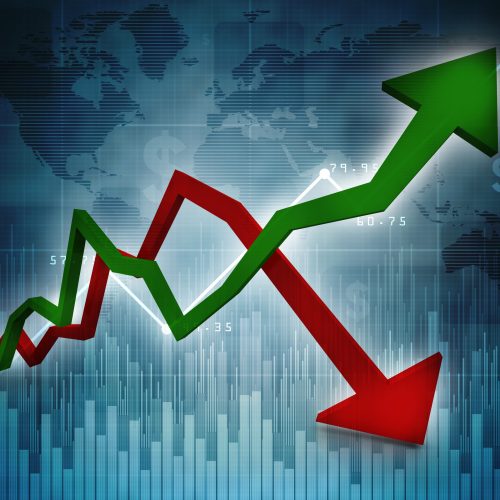 Last week, when I said we should expect more volatility in the wake of a rising rate environment surely turned into an understatement.  The SPDR S&P 500 (SPY) and Invesco Nasdaq 100 (QQQ) have moved over 3% during 4 of the past 5 trading days. The daily trading range — from high to low — has exceeded 5% twice. All told, the SPY and QQQ have dropped below the February 24th lows.  We remain mired in a bear market with the SPY now off 15% and QQQQ down 25% for the YTD.

Both indices have been down for 5 consecutive weeks; the longest streak since the 2020 pandemic-induced crash, which then began an epic bull run on the sixth week. Before that, you need to go back to the 2008 financial crisis to find such relentless selling.

Before I further delve into the gloomy picture, in full disclosure, my Options360 Concierge Trading Service established a moderately bullish position this morning in the QQQ’s through a debit calendar spreads and credit call spreads combo.  This was on the notion that the $300 level will hold and lead to a short-term bounce.  However, this is a short-term trade that’s likely to have 2-3 adjustments in the next week in order to leverage pumped-up premiums thanks to the high-implied volatility.

To see how I manage these positions, and get new trades in real time, claim your special 1-month trial Options360 trial offer for just $19!

Now, back to the big picture and why I’m still concerned about the current market climate.

First, I’ve already discussed how the Fed blew it last week by taking a 75 basis point hike off the table and not being aggressive enough with quantitative tightening (QT).  Even if inflation tempers down a bit, they’re still way behind the curve and far from ‘normal’ rates, or a policy of equilibrium.

What really concerns me is the Fed will be hiking just as the economy is slowing down.  Last quarter, we had a negative GDP; which was mostly blamed on a drop in government spending.

And while we keep hearing that corporate and personal balance sheets are in the best shape in years, that is simply not informally true. Once you move out of the blue chip companies and top bracket of income and wealth, it’s becoming clear that businesses and people are beginning to struggle.

It’s not just startups or recent IPOs, which have been able to adopt a growth-at-any-cost business plan, thanks to easy money, are suddenly tightening their belts.  During its earnings call two weeks ago, Amazon (AMZN) said it was ‘overstaffed.’  Yesterday, Uber’s (UBER) CEO sent a company wide email  including a statement that “hiring is a privilege.”  Which I take to mean that there’ll be a hiring freeze with layoffs soon to follow.

These young high-wage earnings were exactly what drove meme mania in 2020/2021. Also, if you’re wondering why Bitcoin is down some 50% this year, understand these are the same buyers, or should I say, now sellers. Simply put, the marginal buyer, which is who sets the short-term price, is gone.

Digging deeper, we see that most people’s balance sheets are in bad shape. Recent data shows borrowing, including revolving and credit card debt, jumped 22% to an all-time record during the second quarter. The combination of no more stimulus and inflation left the average consumer struggling and forced to borrow; into a rising rate environment no less. 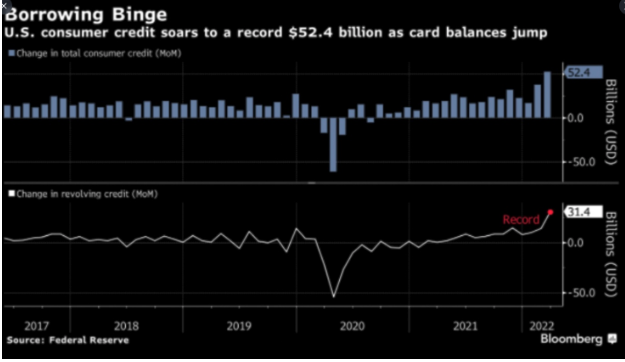 The poster child is Upstart (UPST) which was supposed to disrupt the credit card industry with its “Buy Now Pay Later” (BNPL) model.  First, you know you’re in a suspect place when acronyms get created to describe your business plan. Second, aren’t all credit cards, by definition, BNPL?

I’m afraid with free money no longer available to companies and consumers, we’ll be seeing a lot more stocks that have already been cut in half get cut in half again.

[$19 Sale] Claim your spot in the service that’s generated profits for its members (82% in 2021) every single year since inception — The Options360!