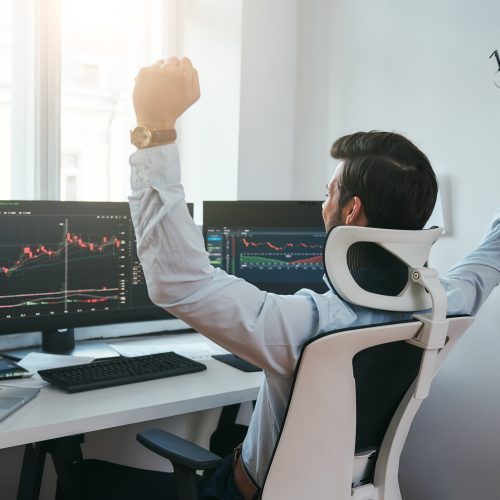 As of midday, the major indices are holding yesterday’s lows. But, there’s a real battle ensuing between the bulls and bears within a large trading range. For Dow has a range of over 500 points; it’s been both up and down on the day.

My gut tells me the market will make new lows in the coming weeks.  However, Options360 is taking advantage of the volatility through a combination of spreads in the Invesco Nasdaq 100 (QQQ).  I’ll probably continue using ETFs such as QQQ, the SPDR S&P 500 (SPY), the Van Eck Semiconductor (SMH), and Financial Select SPDR (XLF) as trading vehicles rather than individual names.  That said, The Options360 Concierge Trading Service initiated a new bearish position in Apple (AAPL) today.

I think the market will fall further as we continue seeing companies, and even whole sectors, blowing up. Today, there is another handful of stocks, such as Unity (U) down 30%-plus, following earnings reports.  U was already down 75% from its 2021 high. Remember what I said yesterday: If it’s down 80%, it can fall another 80%.  I think a lot of stocks that have been cut in half will need to be cut in half again before approaching anything resembling a realistic valuation.

And, a major reality check is happening in crypto land as some coins and NFTs implode.  In addition, the areas were either outright ponzi scams or just pumped on pure speculation. Even the narrative of Bitcoin being a value store and a hedge against inflation has been completely derailed.

The irony is that as institutions became increasingly involved, they’ve become just another trading sardine correlated to the risk-on/risk-off nature of all other assets. And right now, it’s a risk=off environment where selling begets selling.

The image below shows how trading on the Coinbase (COIN) platform indicates that institutions are the crypto arena’s prime players. By the way, COIN is another stock down 80%, and it can fall another 80%. 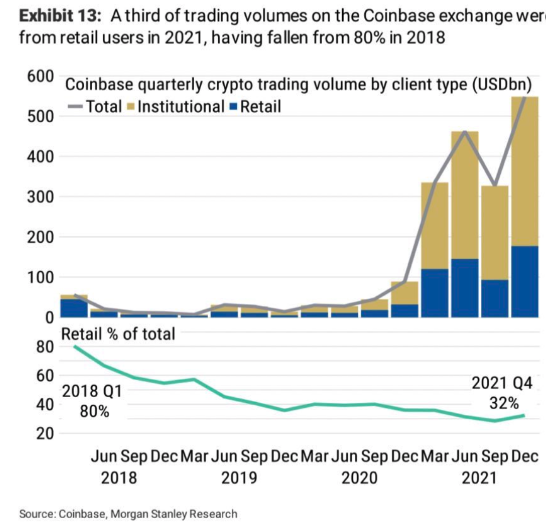 We’re at the bear market stage when people get despondent. But, we’re still not at the “just get me out” capitulation stage.

CNBC often provides a sense of investor sentiment that can be a contra-indicator.  After the market closed last Wednesday, it broadcast one of its “Markets in Turmoil” specials.  I think they went to the programming choice a bit prematurely as the SPY and QQQ dropped another 5% and 8%, respectively.

A somewhat-humorous image being shared on Fintwit featured the market’s standing a year after each of the 67 “Market in Turmoil” specials.  Bulls can take heart that it’s had a 40% average annual gain. 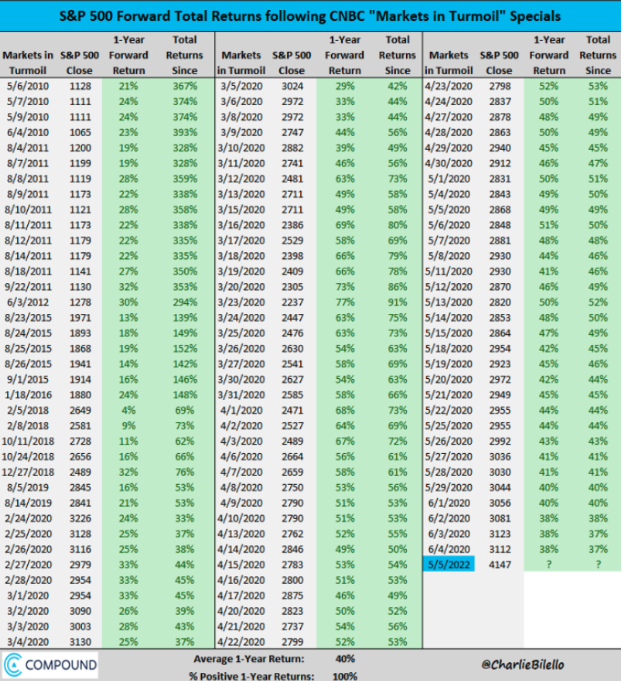 But, this only covers the 12 years starting from 2010, which happened to be one of the great 10-year bull markets. The Fed put was very real during this period.

We’re in a very different market now; the Fed is serious about hiking rates and taming inflation even if another stock’s down 80% means crashing asset prices and throwing the economy into a recession.

I’ll take my cue from this more sober and longer-dated Bank of America study, which shows that out of the 41 times since 1928 that the S&P declined five consecutive weeks, the majority of the time the market was even lower over the next few months. 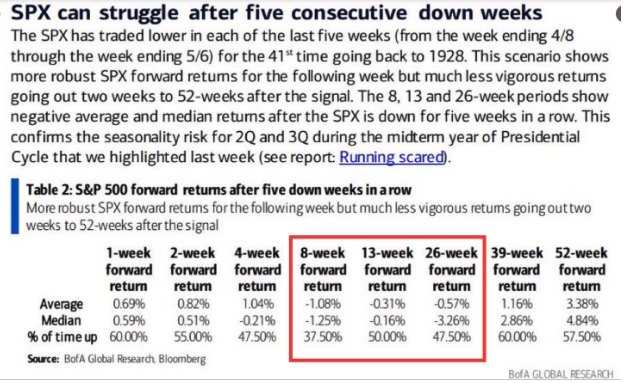 There could be more rough sledding ahead. However, Options360 is indeed positioning accordingly.

[$19 Sale] Claim your spot in the service that’s generated profits for its members (82% in 2021) every single year since inception — The Options360!