Roughly a month ago, in the days prior to the election, I revealed how I  established an iron condor position in the SPDR 500 Trust (SPY). My dual thesis was that post-election implied volatility would decline significantly, and the SPY or stock market would settle into a fairly well-defined range.

I was 100% correct on the first point as implied volatility in the SPY declined from 38% pre-election to its current 20% level.

However, on the second component of SPY staying range-bound, I was severely wrong, forcing me to make several adjustments over the past few weeks. I thought it might be instructional to share the specifics of adjustments, my reasoning behind them, and where the position now stands. 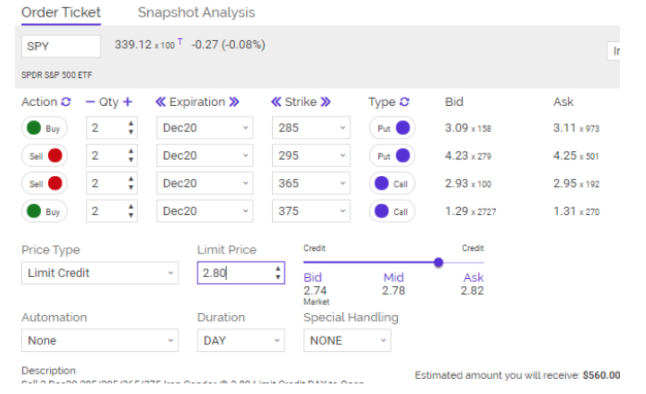 The inside strikes of 295 and 365 were each about 10% out-of-the-money with a 0.11 delta, meaning they had a nearly 90% chance of expiring worthless.  Coupled with the expected decline in implied volatility and the inexorable march of time decay (theta), I figured I’d achieve 50% of the maximum profit within two to three weeks.

But, a funny thing happened as I was counting my chickens; the SPY historically rallied, running almost 11% in just 5 trading days pushing through the short 365 strike.  Uh oh!

After white-knuckling this breach of my inside call for a day, I took action on 11/9 when the SPY pulled back towards the 360 level.  The adjustment I made was to roll up the position’s put side, dramatically, to collect a good chunk of premium.  Specifically, I rolled the existing 285/290 spread up to the 330/340 strikes for a $1.10 credit. 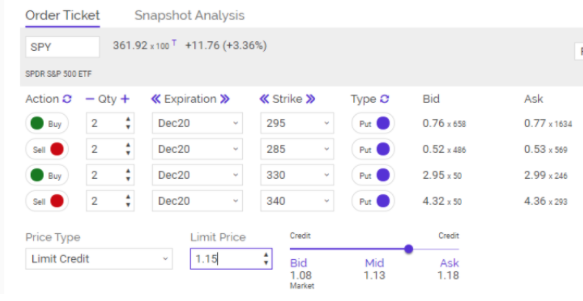 But, last week a new rally commenced leading me to make a more drastic decision adjustment, one focused on risk reduction.  As I wrote to Options360 members in Monday’s Alert, “ We are taking two steps here to reduce risk.  It’s a two-step process, first,  close half (1 contract) of the iron condor for $3.90 or around breakeven.  Second, roll the remaining position up and cut the width between strikes to 5 from 10 wide.”

However, we’re not out of the woods yet.  With SPY rallying through $366 today, I need to start contemplating my next move. But, with the risk mostly removed, my knuckles will no longer be turning white.