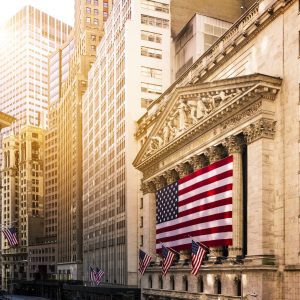 The Federal Open Market Committee (FOMC) will conclude its two-day meeting tomorrow with a 2:00 pm ET statement release and a press conference shortly after.  Fed days always bring tension and short-term volatility in the form of knee-jerk reactions. Typically, stocks then resume their upward trend as J.Pow assures the market it has no intention of raising rates.  But, tomorrow’s meeting could have a longer-term impact, determining where stock indices go over the next few months — will the S&P 500 (SPY) and Nasdaq 100 (QQQ) finally burst to a new leg higher, or will a significant correction arrive?

The Options360 Trading Concierge Service portfolio has already made a few moves to prepare for either outcome.  I’ll get to a few of those details below.

To access all real-time trades, take advantage of our special one-month offer to the Options360 Concierge Trading Service for just $19!

On Monday, legendary investor Paul Tudor Jones said that “tomorrow’s meeting will be the most consequential of not just Powell’s career, but over the past decade.”  His focus was on inflation and his feeling is if the Fed doubles down and maintains a commitment to low rates and quantitative easing actions, Jones said he’ll go “all in” on inflationary trades — from commodities to industrials and adding to his Bitcoin (GBTC) holding, which already stands at a healthy 10% allocation. He’s not alone in keying on inflation. Whether it’s transitory as the Fed believes, or there’s a longer-term secular shift from what was a deflationary environment towards higher prices.

My view is that inflation focus is somewhat misplaced because both of them can be correct. The recent commodity prices and input cost increases are temporary as the basic supply/demand coupled with replacement costs result in a price reversion.  For example, the price of lumber, which soared over 300% from February to May, has dropped some 35% in just the past two weeks.  Supply chain issues, especially for semi-chips will work themselves out within the next few months.

On the other hand, the pricing power of some sectors, such as packaged goods, tends to be sticky; Procter & Gamble (PG), and Kellog (K), who tend to shrink product size as a backdoor way to raise prices, won’t be reversed any time soon.  More importantly, the wage increases, which as I wrote last month,  believe is the only cost that can’t be passed along to the end-user, is here to stay. That’s healthy for Main Street and the overall economy — if I earn more I can afford higher shampoo and corn flakes’ prices.  But, it will ultimately hurt the profit margins of most businesses, especially services industry-related ones.

The dichotomy between transitory input costs and the potential for a longer-term structural shift in higher prices and wages has me taking a hedged approach for the Options360.  While each position has its own internal hedge using spreads and defined risk/reward parameters, I’m heading into tomorrow’s Fed meeting with an eye towards hedging the overall portfolio.

Firstly, this meant reducing some risk through adjustments.  This started with closing out our position Microsoft (MSFT) for a 57% gain as the diagonal spread was fully in the money. As I wrote in yesterday’s member alert:

“We’ve been in this position about a month during which time I rolled it up to be aggressive, then down to be defensive, split the rolls apart for balance and last week conjoined them …now let’s just book the profit.”

Other risk reduction moves were taken in bullish spread positions including Walmart (WMT), and Skechers (SKX), among others, by rolling to collect premium and reduce cost basis while maintaining upside potential. All told, Options360 currently holds five bullish positions and one bearish in individual names.

To get all Options360 trades & a real-time portfolio tracker, jump on board a one-month trial for just $19!

Given this clear bullish bias, I was looking for a way to establish a hedge against a broad-based sell-off.  I settled on using the QQQ and employing a ratio put strategy.  The QQQs recently added Monday and Wednesday expirations, giving us numerous opportunities and great flexibility for both premium collection and capitalizing on a directional move, in this case lower, over the next two weeks.  This article describes how I leverage three expirations per week in what I described as seeking a “triple play.”

Here’s a section from the alert sent to Option360 members on Monday.

“The QQQs look like they are set for blast off. But so did the SPY and IWM one and two weeks ago, only to stall out once they tipped the highs.

QQQ’s are now in the same position and I feel like the rotation to jump back into big-cap tech/growth may lose some steam. Or worse (or better) with Wednesday’s upcoming Fed meeting any hint they are starting to “talk about talking about ” tapering could cause a shift back to higher interest rates and pressure on high valuation tech names. Remember, they have already reduced corporate bond buying and there seems to be a growing number of Fed members who feel they can and should decrease the overt market interventions while maintaining a low-interest rate policy. It’s a fine needle to thread and who knows what the market is truly prepared or has priced in.

But here is the potential double top coming into play.” 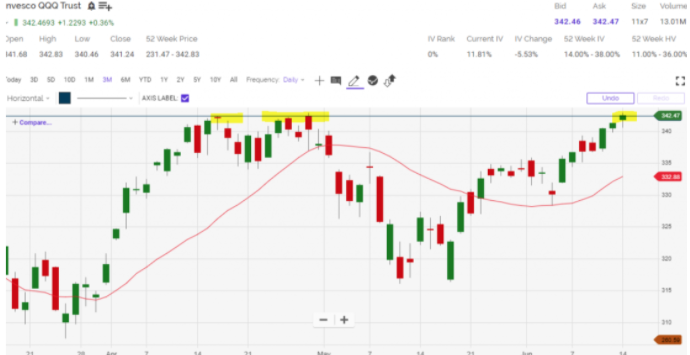 Unfortunately, I can’t provide the details of the action taken here yet as it would be unfair to paying members.  However, I will say the trade will still be able to be established tomorrow ahead of the Fed meeting, albeit at a slightly higher cost as the QQQs have sold off today.

To get this QQQ trade, every other trade, plus live webinars & Options Academy access, grab uour one-month Options360 $19 trial offer before it’s too late!